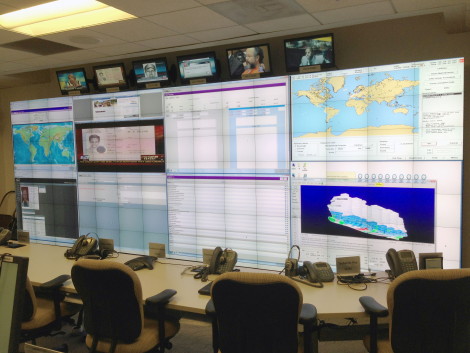 The center features a huge video display wall composed of 105 Christie MicroTiles, measuring 7’ high x 20’ wide, and powered by the Christie TVC-1700 video wall processor, which can display up to 64 outputs from a variety of digital sources and devices.

Installed under the guidance of AV integrator Pacific Video Products, Princess Cruises’ video wall monitors up to 10 content feeds which include charts, videos, live television broadcast, and ship models in any size, simultaneously. When activated, the center allows the emergency response team to effectively stay in audio and visual contact with any of its ships, with information that can quickly and easily be integrated, customized, recalled and shared from different locations and sources with high accuracy and reliability.

Princess Cruises is dedicated to providing a relaxing and invigorating escape, with fleets that host over a million passengers each year. Working closely with Pacific Video Products, it developed a PC-based monitoring solution using the Christie TVC-1700, a flexible, built-to-order display wall processor delivering exceptional graphical power and multiple input options with local applications, network-streamed desktops, and direct-connected DVI, RGB and video inputs for control room video walls of any size. The TVC-1700 is managed by the intuitive, multi-tiered, proprietary software Christie MASTERSuite, which enables instant access to any source of visual information in the control room.

Princess Cruises and Pacific Video Products chose Christie MicroTiles after comparing several other options. According to Bob Myers, manager, presentation Systems of Pacific Video Products, there were a number of strict requirements and challenges involved in the project that made MicroTiles the perfect solution. Among them, the system needed to be simple, reliable, and able to fit into a limited space.

“The room is unique from a design stand point, requiring a system that is flexible and compact enough to maximize use of the shallow space,” says Myers. “Thanks to the Christie MicroTiles’ compact size and custom pedestals, we were also able to add two or three vertical rows of power strips against the wall and install six LCD displays, with a live television feed where the images can be pulled onto the large video wall.

“Since the MicroTiles extend into the room, we used black louvered side panels to provide a clean look and promote airflow to keep the system cool. We also placed openings in the ceiling above the display to provide relief for heat buildup and further promote airflow.

“We spent many months researching and reviewing different options. When we met with Christie’s Ken Hartling and the company demonstrated their MicroTiles solutions, we knew we had found our solution. The images wowed the audience with how bright and sharp they were, from almost any angle. For Princess Cruises, where the safety of thousands of passengers is paramount during emergency situations no other display wall and video processor solution would do.”

Another factor was the seamless integration of images on the screen. Christie MicroTiles can be joined with only a 1 mm gap between each unit, so one sees a higher number of high resolution images simultaneously without thick borders.

“Harnessing the power of the Christie TVC-1700, we are able to see these images ‘anywhere’ on the wall, in any size, something that was impossible to do before with projectors,” says Andrew Shand, fleet safety manager (Emergency Response), Princess Cruises.

“The deployment of Christie solutions at Princess Cruises provides a highly functional, highly adaptive Emergency Response Center that will meet our customer’s needs today, while also equipping them with the tools they need for solving tomorrow’s emergency situations,” says John Stark, senior director of control room solutions at Christie. “By embracing forward-looking trends and using award-winning Christie MicroTiles’ high-resolution, high brightness digital display screens and the powerful Christie TVC-1700, Princess Cruises has developed a model for digital emergency response centers that is the envy of the industry.”

“The purpose of this room is to support our ships in emergency situations,” says Paul Debnam, vice-president, occupational safety and emergency response, Princess Cruises. “We can stream video and electronic data from other locations and even display information from someone’s laptop onto our video wall. The MicroTiles’ narrow seams and bright, sharp images also allow us to view anything from text to detailed electronic navigation charts in the highest resolution. We have total flexibility with the information coming in and going out using the complete Christie video display wall system.”

Princess Cruises operates a fleet of 17 modern ships renowned for their innovative design and wide array of choices in dining, entertainment and amenities. Princess carries 1.4 million passengers each year to destinations around the globe, ranging in length from three to 111 days.

This entry was posted on Wednesday, November 27th, 2013 at 06:00 @291 and is filed under Scuttlebut. You can follow any responses to this entry through the RSS 2.0 feed. You can leave a response, or trackback from your own site.