‘TV vs DOOH Webisode 2″ – i.e. Screenmedia Expo Europe’s viral video will be up first on DailyDOOH later today (make sure to look in the horizontal banner ad space rotation).

It’s great to see these viral webisodes start to take off now in the run up to the event in April – the reception so far has been very positive and we’re looking forward to seeing how the story pans out during March. 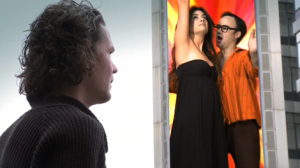 In this webisode we see DOOH and TV go on a whirlwind tour of the different types of DOOH networks and screens; High Impact, Retail and Captive Audience.

They start off with a look at the iconic Manchester Tower owned by City Gateway Media – where TV gets the chance to cavort with a beautiful lady who happens to be in an advert playing out on the huge vertical screen.

To get TV away from hassling the lady, DOOH transports them to a cashpoint and then a retail environment where he attempts to explain what it is these networks do and how they do it.

It is at this point that we eventually end up in a creative content agency which is where Webisode 3 will pick up from so watch this space!!!

This entry was posted on Wednesday, March 4th, 2009 at 14:47 @658 and is filed under Scuttlebut. You can follow any responses to this entry through the RSS 2.0 feed. You can leave a response, or trackback from your own site.