Allentown, Pennsylvania-based Clear Channel Airports, a division of Clear Channel Outdoor, recently launched a new indoor digital media network for Philadelphia International Airport – and signed on a number of major brands to use its state-of-the-art network to better engage with travelers passing through the city. 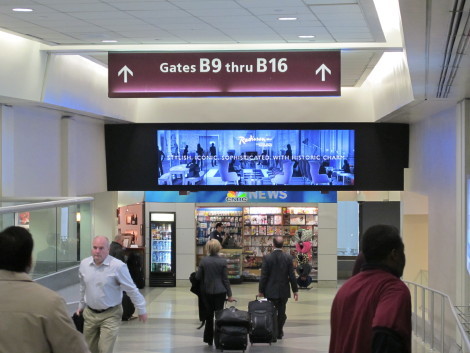 Clear Channel Airport’s digital media solution enhances the passenger experience while allowing advertisers and sponsors to connect with millions of travelers in even more valuable and compelling ways and offers a powerful new advertising platform that delivers messages from local and national brands to large numbers of sought-after business and leisure decision-makers.

In the last three months, US Airways, Radisson Blu Hotels & Resorts, Barracuda Networks, Saint Joseph’s University and the Philadelphia Museum of Art have been present on the new digital network.

“Philadelphia International is among the first airports in the U.S. to introduce synchronized digital content to its advertising and passenger engagement program,” says John Moyer, senior vice-president, airport development, Clear Channel Airports. “This digital media network will offer prolonged and direct exposure, allowing brands and products to engage travelers as they move around the terminals.”

This entry was posted on Wednesday, January 15th, 2014 at 19:38 @860 and is filed under DailyDOOH Update. You can follow any responses to this entry through the RSS 2.0 feed. You can leave a response, or trackback from your own site.