Clear Channel Outdoor is the new advertising media provider for the highly trafficked South Station in Boston, and has also been chosen by the San Diego Metropolitan Transit System as the new operator and media provider for MTS’s 400-plus bus shelters. 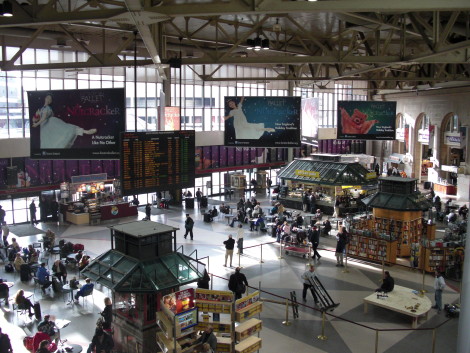 Located in the heart of Boston’s major business district, South Station is a restored historic landmark and acts as the major downtown commuter rail station. It serves four million visitors monthly throughout the greater Boston Metro area and is a major hub for the Massachusetts Bay Transportation Authority’s primary public transportation system, and a main stop for Amtrak’s Northeast Regional service.

The Boston region plays host to over 22.9 million tourists a year, while also being home to a population of over 5 million, making it the seventh largest Designated Market Area (DMA) in the country. Boston is also recognized as the top ranked digital city by eRepublics’s Center for Digital Government and the Digital Cities Program.

“Adding South Station to our already robust portfolio of assets in Boston will amplify our clients’ ability to reach consumers and tourists in a city known as an international center for higher education, medicine, finance and professional services,” says Suzanne Grimes, president and COO, Clear Channel Outdoor – North America. 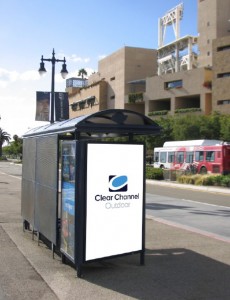 In San Diego, 322 of the 400-plus bus shelters currently offer advertising opportunities to local and national advertisers seeking to reach audiences in San Diego.

Further, CCO is the one company that can now deliver all out-of-home categories to advertisers who want to reach the millions of people living in the 3,240 square miles of the City of San Diego and its greater metropolitan region.

“Clear Channel Outdoor was selected because of the strength of its regional and national advertising team and its local commitment to excellence in shelter maintenance,” says Paul Jablonski, CEO of MTS. “Our shelters are an important asset that not only provide a much-needed amenity for our customers, but also make a positive statement to the community about public transportation. That Clear Channel can deliver exceptional maintenance capabilities and increase our ad revenues enhances our ability to provide service to the residents of and visitors to San Diego.”

“The addition of the MTS bus shelters completes Clear Channel Outdoor’s coverage of San Diego County – surfing the North Coast of Oceanside to the U.S./Mexico Border,” says Lynn Palmer, vice-president, sales, Clear Channel Outdoor-San Diego. “But most importantly, this newly-expanded array of out-of-home media will offer advertisers even greater flexibility, reach and impact than before.”

San Diego plays host to over 32 million tourists a year, while also being home to a population of over 3 million, making it the 23rd largest DMA in the country.

This entry was posted on Thursday, January 16th, 2014 at 17:00 @750 and is filed under Scuttlebut. You can follow any responses to this entry through the RSS 2.0 feed. You can leave a response, or trackback from your own site.