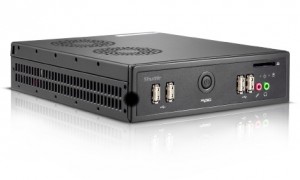 Shuttle specializes in small form factor PC hardware for digital signage, point-of-sale and interactive kiosks in the retail, restaurant, food service and hospitality industries, as well as motherboards and bare bones systems. Its DS61 digital signage players have undergone a battery of tests to ensure compatibility and performance. Since these devices are pre-imaged with Scala player software, they are easy to install and use in any Scala-based digital signage application.

“Obtaining Scala certification for our DS61 i3 and i5 players is a great accomplishment for Shuttle,” says Marty Lash, Shuttle director of sales and marketing. “It’s a rigorous process, and we’re proud to show that our products meet and exceed Scala standards.”

On adding the Shuttle DS61 to its list of certified pre-configured media players, Peter Cherna, Scala’s chief technology officer, says, “Scala and Shuttle together can bring you world-class signage solutions on an attractive, slim form-factor PC with quiet and redundant cooling. Supporting one or two video outputs, the DS61 will be a very good choice for many signage applications.”

“Scala certification helps to ensure that digital signage installations and connectivity are seamless,” says Lash. “Each Shuttle DS61 Scala-certified player comes pre-loaded and imaged with the latest Scala player software so it is essentially plug-and-play. Integrators simply connect the device to the Internet or LAN and the player is ready to be connected to the network.”

This entry was posted on Friday, January 24th, 2014 at 07:00 @333 and is filed under Scuttlebut. You can follow any responses to this entry through the RSS 2.0 feed. You can leave a response, or trackback from your own site.