There were not one but two nice pieces of news out of Daktronics [1] on Tuesday. 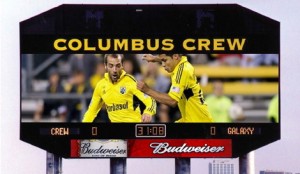 First we learned that Daktronics, based in Brookings, South Dakota, had been asked by Columbus Crew [3] of Columbus, Ohio, to design, manufacture and install an integrated LED video display system including a main video display, an auxiliary video display and two ribbon displays at the stadium.

Then we also learned that the Corpus Christ Hooks [4] will return to Whataburger Field [5] in Corpus Christ, Texas, for the 2014 season with a new LED video display designed, manufactured and installed by Daktronics

Columbus Crew Stadium is the first soccer-specific stadium in Major League Soccer. Opened in May, 1999, it added extra seating and a permanent stage in 2008 and has hosted concerts as well as many major professional soccer events.

“We have been going through a thorough process of analyzing all of the different aspects of our club and where we need to make improvements, and it was fairly obvious that replacing the existing video board at the stadium was a top priority of Precourt Sports Ventures (owners since last summer) for improving the fan experience,” says Anthony Precourt, Crew chairman and Investor-operator “In addition to winning soccer matches and trophies, delivering a professional, high-quality and exciting experience at Crew matches is paramount to our success as an organization, and I am looking forward to this high-impact upgrade for the 2014 season.”

The main video display will incorporate excellent image clarity and contrast with wide angle visibility while providing multiple levels of protection from the elements. This nearly 17’ high by 66’ wide display features a 15HD pixel layout and is capable of showing one large image to highlight live video and instant replays. But it can also be divided into separate windows to show a variety of vivid graphics, colorful animations, up-to-the-minute statistics, scoring information and sponsor advertisements.

The auxiliary video display is being located directly under the main display. It will feature the same 15HD pixel layout and measure nearly 5’ high by 43’ wide, The two ribbon displays – one located on each side of the field – will also feature 15HD pixel layouts and each will measure more than 2’ high by 42’ giving the-minute statistics and game information.

Columbus Crew had already installed a custom Daktronics audio system prior to the start of the 2013 season.

“It is a great honor to again partner with Columbus Crew on their new video display installation,” says Daryl Mihal with Daktronics. sales representative. “These new displays will no doubt provide for an overall enhancement to the game-day experience for The Crew and their fans. It is yet another great installation for Major League Soccer, their fans and the sport as a whole.” 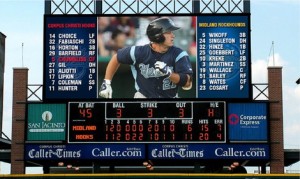 The Corpus Christi Hooks will return to Whataburger Field in Corpus Christ, Texas, for the 2014 season with a new LED video display designed, manufactured and installed by Daktronics.

The Corpus Christi is a minor league baseball team playing in the Texas League as a Double-A affiliate of the Houston Astros [7]. The Hooks played their first games at Whataburger Field when it opened in 2005 on the Corpus Christi waterfront and a year later, won the 2006 Texas League Championship.

Noting that the new installation will bring a better, more complete in-game experience to the Hooks’ fans, Ken Schrom, team president, says, “The ability to see the game in HD quality will increase the enjoyment from a baseball perspective and on the entertainment side, we’ll be able to better engage fans and sponsors.”

The display will feature a 15HD pixel layout and measure 20’ high by 48’ wide. It is capable of showing one large image to highlight live video and instant replays, but, like that of Columbus Crew, can also be divided into separate windows to show a variety of vivid graphics, colorful animations, up-to-the-minute statistics, scoring information and sponsor advertisements.

This display will incorporate excellent image clarity and contrast with wide angle visibility to provide fans with high quality game-day presentation sure to enhance their overall experience. The display will also feature multiple levels of protection from the elements in that southeastern Texas climate.

“Patrons at Whataburger Field will experience the latest in viewing experience with live video, replays, real time statistics, crowd prompts and interactive elements,” says Dan Fjeldheim, sales representative with Daktronics. “The new display will be among the best in minor league baseball.”

The installation includes a Daktronics fixed-digit scoreboard providing at-bat, ball, strike, out, inning, runs, hits and error information. In addition to the equipment installation, the Hooks will also receive a bank of hours for the creation of digital content to be produced and delivered by Daktronics Creative Services. This content will consist of any mixture of sponsorship messages, crowd prompts, headshots, game opens and venue announcements at the request of the team.