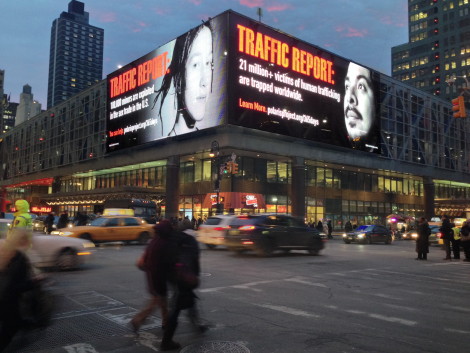 Human trafficking is modern-day slavery where profits are derived from the organized control and exploitation of women, children and men for various purposes including labor and sex acts. Appearing on strategically located billboards in New York and New Jersey, the campaign educates the public on the true scale and diverse victims of human trafficking under the banner ‘Traffic Report’.

The Traffic Report campaign has been timed to reach the local public and the more than 500,000 football fans descending on the region for the Super Bowl, the biggest football game of the year, being played this year in New York. This campaign builds on Clear Channel Outdoor’s broader efforts to highlight the issue of human trafficking with Polaris Project and other partners in a variety of markets since 2012, including Baltimore, Houston, Las Vegas, Los Angeles, Oakland, Philadelphia, Phoenix and Seattle.

“Human trafficking is a multi-billion dollar business that impacts all of us at the community and national levels and demands greater public awareness and action to help victims,” says Suzanne Grimes, president and COO, Clear Channel Outdoor – North America. “Polaris Project’s data on the size and scope of the human trafficking industry is sobering, and we felt compelled to use our power to connect to people to develop a strong campaign that would help draw attention to the issue in the biggest way possible – both to affect change and to send a ray of hope to those who are being exploited.”

“Despite the enormity of the problem, most people don’t even realize that human trafficking is happening in their own back yards, and those being exploited are largely unaware that help is available,” says Bradley Myles, CEO of Polaris Project. “This form of modern slavery occurs at large sporting events, in suburban brothels, and in farms and factories across America. We want people to understand that sex and labor trafficking is a huge problem across the country that demands our attention and resources – 365 days a year.”

Over the next two weeks, the campaign will make more than 11 million impressions via 26 strategically located digital billboards in New Jersey and New York. In Manhattan, the campaign will run at marquee locations including the Port Authority, Penn Plaza and Times Square. Additionally, 23 CC Outdoor digital billboards along the I-95 corridor in New Jersey and Westchester County, New York will run the campaign which will raise the visibility of the issue and engage the public to learn more at Polaris Project.

“I applaud Polaris Project and Clear Channel Outdoor for this tremendous campaign to bring national attention to the atrocities of human trafficking that remain so hidden from our society,” says Laurie Cumbo, New York City Council Member, who represents District 35 in Brooklyn and chairs the Committee on Women’s Issues for the City Council. “It’s unacceptable that in today’s world, human trafficking still exists. It is my hope that this campaign will inform victims of trafficking that there is real help available while simultaneously encouraging others to work collaboratively to end this form of modern day slavery.”

Polaris Project is a leading organization in the global fight against human trafficking and modern-day slavery. It is named after the North Star ‘Polaris’ that guided people escaping slavery along the Underground Railroad.

This entry was posted on Wednesday, January 29th, 2014 at 10:00 @458 and is filed under DailyDOOH Update. You can follow any responses to this entry through the RSS 2.0 feed. You can leave a response, or trackback from your own site.