We end the week with some incredibly sad news. A good friend to the industry, and a truly lovely man, Thomas Dockter passed away late last week. 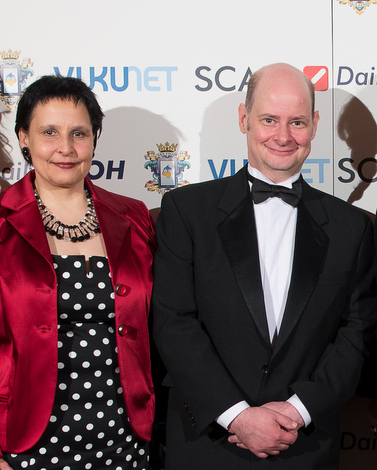 Thomas was the leading consultant on the Digital Signage Industry in Germany and the driving force and father figure of the Digital Signage Best Practise Awards – an ‘awards’ which we have described many times as having the most professional judging process we have ever seen (or had the honour to at some stage be involved with). Thomas was an exemplar of all that judging (and judging criteria) should be.

We were very proud when Thomas agreed to join The DailyDOOH Gala Awards judging panel back in 2012. His illness got the better of him that first year and although he served on our panel and helped us choose the best that the industry had to offer, he was unfortunately unable to join us for the big Black Tie event that particular November.

How pleased we were then, that last year he and his partner, Caroline Zöller were able to come and join us in London (that’s them looking resplendent in the picture above). It is some comfort to us that their last journey together was that event and a subsequent weekend in London. Caroline has told us that she is very grateful to have these good memories.

In December 2013 Thomas knew that his cancer had returned. His big goal was to make it to his 50th birthday in January, which he did and which he celebrated with close friends and family. Sadly he passed away a few days later.

I am sure that all of those in the industry who knew him will join me in sending their best wishes to those whose lives he touched and especially those he has left behind in Cologne.

Thomas was well known and well liked in the German Digital Signage Industry. His dry sense of humour and infectious smile will be sorely missed.

Very sad news, I met Thomas several times and he was always very polite, knowledgeable and passionate about our industry. Condolences go to his family and close friends.

Terrible news, I’ve lost far too many of my friends to various forms of the Big C and you simply cannot measure just how devastating it is to the individual and their family.

I met Thomas twice – once at the Gala Awards and previously at Viscom – a kind, unassuming and genuine man.

Thomas was the perfect example of coerence and passion.
The German market was surely drived and helped from their efforts and initiatives. Condolences to Caroline and his family.

So sorry to hear about this. Had the pleasure of working with Thomas at Viscom in Frankfurt a few years ago. He was known for his strong advocacy of the industry. But I’ll remember him more for his intelligence and accommodating nature. A real gentleman.

Very sad news. I met Thomas and got to know him when he hosted me at Viscom in Frankfurt a few years back. An absolutely wonderful host and colleague.

That’s terrible news. I’ve worked with him twice on the Viscom awards and will remember a very friendly and funny man. We spent ages laughing behind the scenes together at Viscom. Didn’t get a chance to say goodbye as we missed each other at the end.

We took great pleasure in knowing and working with Thomas from way back many years. A truly good and kindred spirit – RIP

R.I.P., Thomas!
During my time at ~sedna as product manager he was pushing me and the product(s) in the right way with a lot of humor and very reflected at the same time keeping in mind how bizarre the whole digital signage world can be. I remember the Digital Signage Best Practice Award 2010 in Frankfurt and the time after. He was a pretty cool guy and a nice person, although we only met and talk only a few times. 😉

What a sad news. What a lovely man, truly a good heart and always friendly. Will miss him… My thoughts go out to his family.