Waterloo Motion will deliver a captive audience of four million commuters every fortnight. Part of JCDecaux and Network Rail’s vision for the future of rail advertising, it consists of a 40 x 3 metre, 6mm pixel, high-definition LED spanning the length of the concourse. 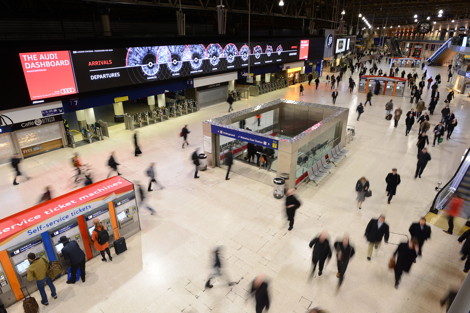 The Audi Dashboard (shown above) is a creative concept featuring branded content developed specifically for the Waterloo Motion site by ad agency BBH London. The Audi Dashboard features live statistics and contextual messages about ‘One day in the life of Waterloo‘ – a series of quirky station facts which are compared to the Audi range. For example: “31,451 cups of coffee bought. If this was petrol, you could drive an Audi A3 Sportback to the moon.”

The dashboard will also offer genuinely useful, real-time information, including how many seats are available on trains departing from Waterloo. This and all other statistics will refresh every two minutes to keep the audience engaged especially during long waits.

Additionally, a Twitter feed from #AudiWaterloo will keep commuters entertained and allow them to participate in the conversation on-screen.

Waterloo Motion is part of a plan targeting the affluent commuter audience in a progressive way across Waterloo, Euston, Victoria and Charing Cross stations.

The campaign was planned by MediaCom, delivered by JCDecaux and bought by Kinetic. The Audi Dashboard was created and designed by BBH London. Data analysis and visualisation was provided by Information is Beautiful.