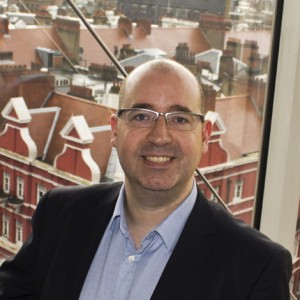 “He was a forerunner,” said Daniel Parisien, mentioning that Harvey had been honoured by DailyDOOH (including the DailyDOOH Best of 2013) several times.

As Director of Digital Strategy at JCDecaux UK, Harvey is responsible for the development of the advertising screen deployment strategy across the Rail, Large Format, Retail and Street Furniture divisions including formats, numbers, distribution, design, capabilities and method of sale for digital.

Accepting the award in absentia, Harvey said on film, “It’s been great working with BroadSign.”

In his prior position as product development manager at JCDecaux (Mar./11 to Jan./13) Harvey was responsible for the development and project management of new product innovations at JCDecaux UK, keeping up to date with new product and software developments in the global market to ensure JCDecaux remained at the forefront of Out of Home Digital.

From June/10 to Feb.2011. he worked for Capita Business Services on the NHS Choices contract (www.nhs.uk) for the UK Department of Health as Distribution Business Development Lead. This role involved syndicating the UK’s No.1 health website content to the top 50 lifestyle websites and content portals in the UK. Current syndication partners include Google, Yahoo, Channel 4, Boots and Newsquest.

Prior to digital signage, he managed a development studio in Manchester who developed integrated mobile phone, web, kiosk and interactive TV applications for partners such as SKY, BBC and ntl: (now Virgin Media).

This entry was posted on Tuesday, February 11th, 2014 at 22:02 @959 and is filed under Scuttlebut. You can follow any responses to this entry through the RSS 2.0 feed. You can leave a response, or trackback from your own site.