At LGW on our way back from #dse2014 on Saturday we bumped into ONELAN MD, Hugh Coghill-Smith at the Baggage Carousel who told us that as soon as he had picked up his bags he was on his way to Dusseldorf for #EuroShop 2014 (and for him, that’s on top of a week in Amsterdam for #ISE2014 the week before #dse2014). 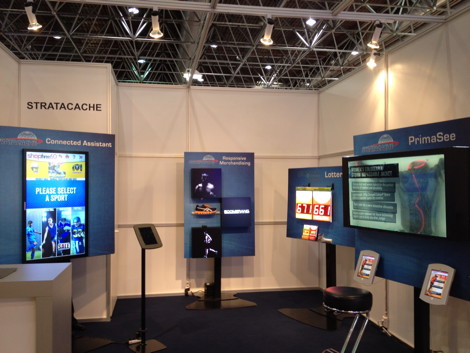 ONELAN are not alone in either exhibiting at two, three, or four events (including #NRF of course), or sending their senior execs to same, in the first two months of the year.

We’ve written previously on the subject of Scala [2] (who by all accounts had a terrific #NRF followed by a fabulous #ISE2014, followed by a brilliant #dse2014 – only to do it all again this week [3] at #EuroShop.

AOpen also are doing Dusseldorf this week [4] as well as STRATACACHE (their booth shown above) and Net Display Systems [5] also have a stand Hall 6 booth 79.