When we met George Burciaga, CEO of Chicago-based elevate DIGITAL [1], at #dse2014 he told us that he feels that elevate DIGITAL has the most comprehensive platform on the market. 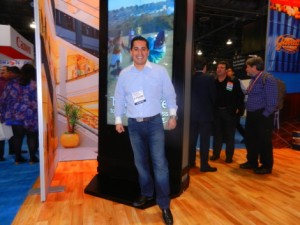 [2]Whether or not that’s correct, the company is certainly attracting some interesting clients, so it must be doing something right.

The company is a developer and provider of interactive applications and connective advertising presented to consumers on interactive, touch screen digital displays.

“We’re now focusing on multiple categories, especially hospitality, sports and retail,” Burciaga said. “We recently partnered with The Linq [3] and now have partnered with one of the largest mall providers in the U.S..”

While Burciaga couldn’t yet release the name, he said that elevate DIGITAL will have hundreds of deployments beginning in April.

Elevate DIGITAL has its own software management system, and it offers facial recognition, apps, data and more, but it continues to partner with others.

“We partner with Cisco [4], because of its smart cities initiative and because we’re interested in its building of an Internet of Things,” said Burciaga. “We can see opportunities in interactive street level digital media. I believe that several European cities are close to signing to become ‘smart communities’.”

One of elevate DIGITAL’s clients is BMO Harris [5], for which data and analytics plays a major role.

“We do just about everything,” said Burciaga. “In 2012, we spent a lot of time and money developing partner contacts but I believe that 2014 will be our biggest year. In fact, I feel that we’ll be a core player in the industry.”