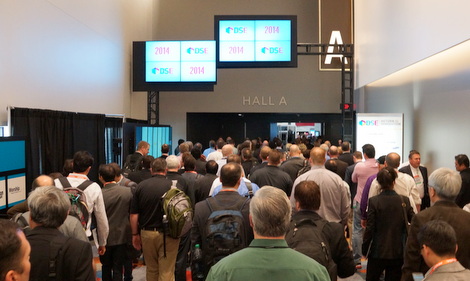 It is claimed that over 42% of those were end users (the primary prospects, of course, that DSE’s exhibitors want and need to see) but, personally, I find that a little hard to believe. 1,813 exhibitor personnel also attended, bringing DSE’s total attendance to over 5,800.

Almost 30% of the attendees traveled from outside the US (that we can believe), attracting people from 67 different countries including: Canada, Mexico, Brazil, South Korea, Japan, Columbia, China, the United Kingdom, Australia and Taiwan.

Amongst the 200+ exhibiting companies, 56 were exhibiting for the first time and 44 were from international markets, expanding the show floor 13% over 2013 to just over 70,000 net square feet.

The industry needs a good annual show and DSE is the best we have but the organizers are going to have to work very hard in the next 12 months to keep their event relevant – especially as they face increasing competition from the likes of CES for technology announcements and vertical trade shows like NRF etc..

This entry was posted on Wednesday, February 26th, 2014 at 14:17 @637 and is filed under Scuttlebut. You can follow any responses to this entry through the RSS 2.0 feed. You can leave a response, or trackback from your own site.