Garmin, the global satellite navigator provider is calling upon UK residents and commuters around the M25 and Surrey area to locate the haphazard cyclist who found themselves cycling along Britain’s busiest motorway, the M25, see ‘M25 cyclist in Surrey sent on motorway by phone app [1]‘. 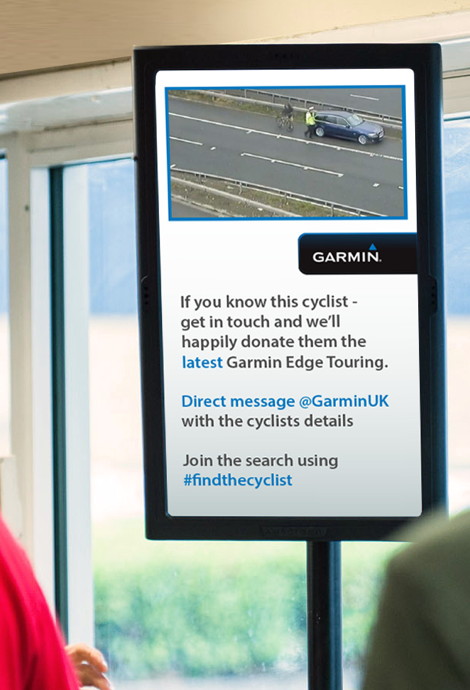 Garmin is featuring ads in 42 venues along the southern section of the M25 and surrounding areas. The ad shows the news report and a speedily created ad that states ‘Should have used a Garmin‘. It then also invites commuters to identify the disorientated individual with the promise of giving him their latest product; the Garmin Edge Touring which features ‘turn by turn navigation’ and most importantly, ‘motorway avoidance’

Dawn Ramsay, General Manager, Garmin UK: “We saw this rather unfortunate individual and couldn’t resist offering them our latest device with turn by turn and motorway avoidance functionality – hopefully if we can identify the person, we can help them ensure this doesn’t happen again any time soon!” 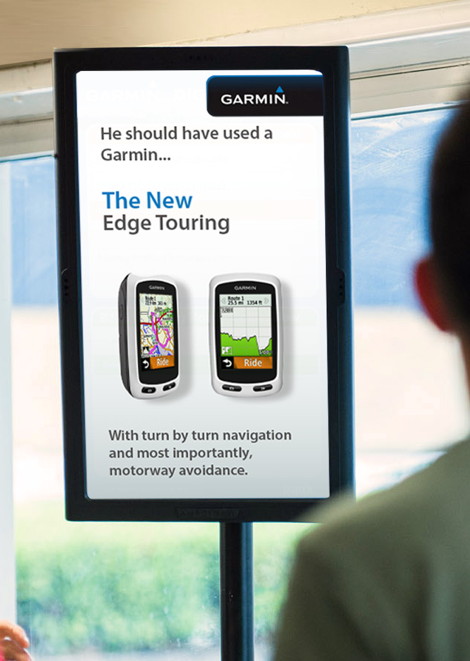 Mike Hemmings, Marketing Director for Amscreen “Garmin contacted us about this as soon as they saw it and using our new ‘Event’ platform, we managed to deliver a rather cheeky campaign within the hour – hopefully we can find the cyclist just as quickly”

If you know this cyclist, Garmin are urging the general public to direct message @GarminUK [4] on twitter and join the search using, #findthecyclist.

2 Comments To "Garmin Ads Along M25 To #FindTheCyclist"

Not a good example to be seen to be rewarding dangerous lawbreaking.