If there was any ever doubt that NEC Display Solution’s Simon Jackson was absolutely super smart when it comes to clever venue selection for his annual UK NEC Solutions Showcase [1] (there should be no doubt, his choice over the years has been inspired; Tobacco Dock in East London, Battersea Power Station, the O2 etc.), then folks should look no further than this year’s selection – The Velodrome, Queen Elizabeth Olympic Park (on May 14 and 15, 2014) [2] as being literally a few 100 metres (perhaps 10 to 15 minute walk max. depending on exact paths in the park now it’s re-opened) from a new East London tech cluster, which will be called Here East. 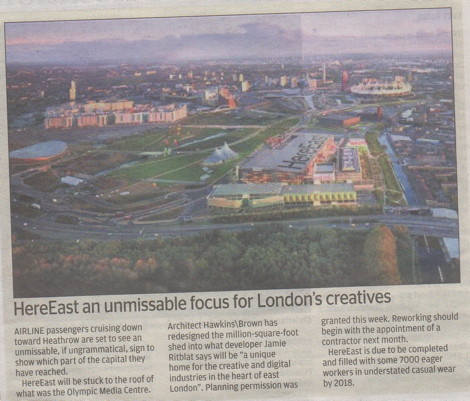 iCity [4], the organisation tasked with transforming the former press and broadcast centres at the London Olympic Park (into something) announced yesterday that the Here East tech cluster will house start-ups, corporations, universities, venture capital investors, and a new data centre.

It will span across three main buildings, containing over a million square feet of space that needs to be designed and developed.

Whilst Here East will not open until 2018, I think we can safely say that putting the @NECShowcase [5] in this part of London, really says something about our industry and what role NEC Display Solutions want to take in it. Maybe in 2018, the Showcase will be back – making use of that 750 seat auditorium!

You can register FREE for the NEC Showcase here. [6]