Just over two weeks ago, Dave Morris was in the Royal Airforce, ending a military career that he joined at 16, worked in a Field Communications Unit and saw him do stints in Cypress, Iraq (twice) and Afghanistan (also twice), among others. 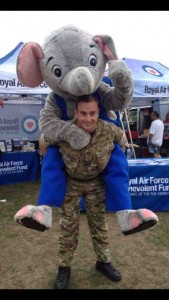 But two weeks later, now out of the service, he has launched Nomad LED [2], a new company based in the UK that offers something we haven’t seen before: all-electric, emission-free, mobile advertising vehicles.

“I’ve actually been working towards this for a year, and started developing it in earnest last September,” Morris says. During his 10-years in the Royal Airforce, he spent, among other things, time working in IT, then in communications and audio-visual technology and eventually got to understand LED displays.

“It all helped prepare me for this,” says Morris. “I realized that there are already a lot of companies in large LED displays, but not many in mobile advertising vehicles, and none that we know of like ours. As far as we know, we are the first with mobile ad vehicles powered by battery. We are eco and green.” 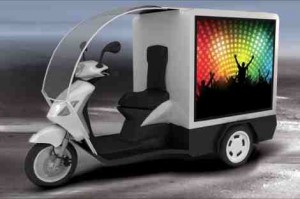 With vehicles that are environmentally friendly and emission-free, Morris is eyeing exhibitions, trade shows and conferences where he can park indoors (and, of course, outdoors), and he’s initially making the rounds of event management companies to make the company known.

“We can see it for promotion campaigns, advertising, any type of content,” he says. While his vehicles come equipped with software content management programs, Morris is already looking to upgrade these so as to make them more flexible and available, eg., for twitter messages and other technology.

This week, Morris was showing off his first of three vehicle formats at the Business Expo 3.0 exhibition at the Hilton Hotel near the Milton Keynes Dons Football Stadium. 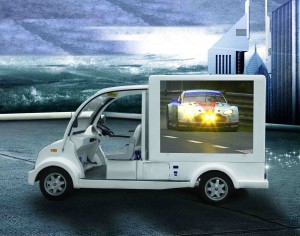 “”We are also getting noticed already by my local council (in Torquay) and there is consideration being given for Nomad LED use by local police with community events,” says Morris. “Various local councils in the area are also showing interest, because there isn’t a lot of LED signage in this part of England, so they seem quite open to it.”

Morris is just now taking possession of the first vehicles. When we spoke on Wednesday, he had an Eco-Mini AdVan and was expecting an Eco-AdScooter in the next couple of days. The large Eco-AdVan will arrive later in the year. The vehicles have an eight-hour battery life before a recharge is needed – done with a simple UK three-prong plug. 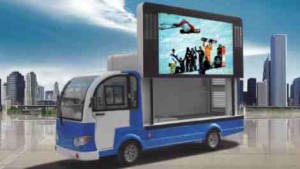 “We have the resources available to add more vehicles as needed,” says Morris who is owner and managing director of the company. The vehicles come from a source in Europe which he wants to keep private for now.

Morris has big plans. If the business takes off as quickly as he hopes, he’s already thinking of expansion outside the U.K. – initially probably in Switzerland because of that country’s high interest in the environment. And perhaps into North America with a partner.

“First we want to start out small until we have everything running without any unexpected bugs,” he says.

Then it will be full speed ahead!