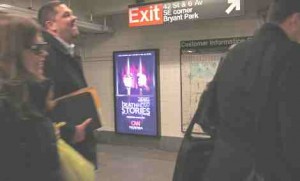 The new network will feature content from TNT, TBS, CNN, Adult Swim and other Turner brands. To bring this content to life, CBS Outdoor, under its recently launched Ignite: Innovations Lab platform, has installed 10 large format digital dioramas, measuring 66” high and 38.5” wide, in strategic locations throughout the subway system.

The capabilities of the platform allow Turner to update promotional content in real time, making this a full OOH video network. As part of this promotion, Turner has exclusive use of the digital network and its hardware, while the screens will be controlled by Turner on a real-time basis via a dynamic feed.

The network and its supporting LCD screens have been installed in Manhattan’s busiest MTA stations, including Grand Central, Times Square, Columbus Circle, Bryant Park, Lincoln Center and Herald Square, among others. The messaging is expected to reach millions of riders and passerby’s throughout March, and a significant portion of the MTA’s 1.7 billion annual ridership throughout the year. 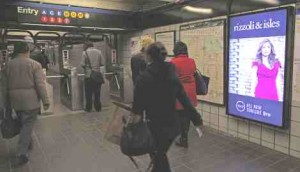 CBS Sports and Turner Sports will provide live coverage of all 67 games from the 2014 NCAA Division I Men’s Basketball Championship across four networks – TBS, CBS, TNT and truTV, beginning Tuesday, March 18, with the NCAA First Four on truTV presented by Northwestern Mutual.

For the first time in the event’s 76-year history, the 2014 NCAA Division I Men’s Basketball Championship National Semifinals will be presented live across three networks – TBS, TNT and truTV – to provide fans with a variety of viewing options for this marquee event. For the 33rd consecutive year, CBS will broadcast the NCAA National Championship game in 2014.

“These screens allow us to dynamically showcase the breadth and variety of Turner’s networks in real-time,” says Dennis Camlek, senior vice president, Turner Media Group, TBS Inc. “It’s a creative canvas which helps us drive both consumer and trade awareness of our original entertainment, sports and news programming.”

“There is no better way to reach the New York City audience than entry points within its major artery ways: the subway system,” says Jodi Senese, chief marketing officer, CBS Outdoor. “Every day millions of riders pass through these doors, and having a prominent large screen network within their commute is a great way to reach this audience. NCAA March Madness is among the most anticipated sporting events on television, and this is a very unique way to kick off this program.”

MediaVest is serving as the media agency of record and CBS Outdoor has been designated as the official media vendor. This is the latest in a series of ‘firsts’ for Turner. In 2010, Turner Sports was the first to bring video to New York’s public transit system by installing screens in the shuttle trains between Times Square and Grand Central Station to promote Major League Baseball on TBS. Following that successful campaign, this program was created to deliver innovation across Turner’s portfolio of networks.

This entry was posted on Monday, March 10th, 2014 at 16:56 @747 and is filed under DailyDOOH Update. You can follow any responses to this entry through the RSS 2.0 feed. You can leave a response, or trackback from your own site.