With more traditional sign companies becoming interested in offering their clients digital signs – and with companies in the digital out-of-home sector interested in working with them – it was interesting to learn, via the Alabama news source AL.com [1], that the small city of Daphne, Alabama [2], (population approximately 23,000) may start allowing its businesses to use digital signs. 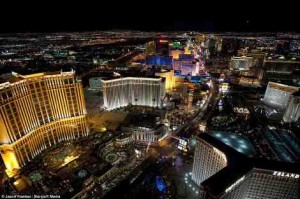 It won’t be Las Vegas!

As part of an overhaul of its sign ordinance mostly aimed at giving businesses more on-premise marketing options, Daphne’s City Council is apparently poised to allow a wide use of digital signs for the first time.

Under the city’s current law, only schools are permitted to use digital signs.

Through months of debate, first by a city-appointed committee and then the Planning Commission, guidelines were vetted for the proposed use of digital signs. If approved during the council’s next regular meeting on March 17, the new sign provision to the land-use ordinance would give all businesses and religious institutions the right to replace existing signs with digital monument signs.

The new rules will apply to on-premise signs only and not off-premise billboards, which are still prohibited in the city aside from one allowed through a recent court settlement with Lamar Advertising Co. [4].

The electronic signs on business or church property would be strictly limited to monument-style, freestanding structures no bigger than 12’ in height and limited to 60% of the sign face or no more than 30 sq. ft.. The signs will be required to dim at night. The digital display will have to be static with copy changing no faster than every 30 seconds.

“We have prohibited effects,” says Adrienne Jones, the city’s community development director. “No scrolling, no streaming video, no sound, no animation.”

Digital signs will not be allowed in the Olde Towne Daphne district on Main Street as well as residentially zoned areas unless a special exemption is granted.

During a recent public hearing, the council heard mixed opinions on the proposed changes.

Only one Daphne Planning Commission member had a dissenting vote regarding the board’s approval of digital signs and only one council member spoke negatively.

“We’re allowing businesses to move with the times and us being more technology based,” one council member said. “It’s going to be a picture, changing once every 30 seconds. So it’ll just be another picture. It won’t be flashing. It won’t be Vegas.“