College basketball is popular in the U.S, but nothing is more popular than the annual conference and national championships that go under the nickname of March Madness, beginning March 18/2014. 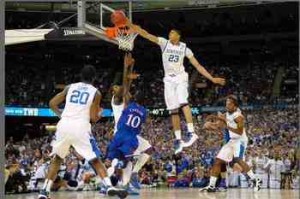 Brookings, South Dakota-based Daktronics has video displays and scoring equipment at 44 different venues as the men’s and women’s college basketball teams compete for conference championships across the country and for the national championships. Of those venues, 11 have Daktronics event support staff on hand for every game.

Sarah Rose, Daktronics service manager, says that these facilities rely on Daktronics to ensure their equipment is operating as intended to entertain and inform basketball fans during these tournaments.”

All 11 facilities receiving Daktronics event support have a technician on site two hours prior to the gates opening for each event. Those technicians remain on site for the duration of all games, assisting with any display or control system needs that might arise during the event.

“Our certified technicians provide our customers with a piece of mind; if any issue should happen to arise, someone is right there to help them resolve it,” says Rose.

This entry was posted on Monday, March 17th, 2014 at 16:00 @708 and is filed under Scuttlebut. You can follow any responses to this entry through the RSS 2.0 feed. You can leave a response, or trackback from your own site.