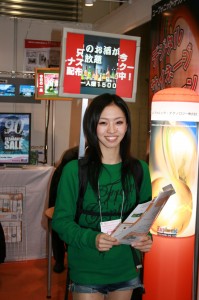 RetailTech 2009 was held last week, March 3rd through 6th in Tokyo, Japan. The annual event brings together all of the the largest vendors in Japan to showcase the latest in retail information systems. Everything from RFID and IC technology to in-store promotion and logistic systems are exhibited by hundreds of vendors. This year the 25 year old event introduced a new special exhibition: “Retail Digital Signage 2009” in what will perhaps become the largest Digital Signage event in Japan.

Some of the key exhibitors in the Digital Signage exhibition, were Lighthouse (Hong Kong based LED manufacturer), PDC (Panasonic’s Digital Signage focused subsidiary), JVC, Scala and Thomson Canopus. Scala’s CEO, Gerard Bucas was in attendance and had this to say: “It was very impressive, I was surprised at the number of exhibitors in the Digital Signage area. It was far more than we have seen in previous years events and shows how far along digital signage has come in Japan. We are definitely going to attend again next year.”

The Lighthouse booth powered by Vanten’s EngageMedia, seemed to be the crowd pleaser of the show. Lighhouse’s 4mm pitch LED screen impressed visitors with is LDC like resolution and color.