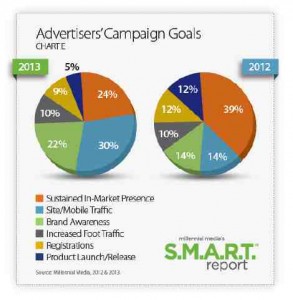 The Scorecard for Mobile Advertising Reach and Targeting (S.M.A.R.T.) delivers regular insights on key trends in mobile advertising based on actual standalone campaign and platform data from Millennial Media.

Entertainment was the number one vertical on Millennial Media’s platform in 2013, up from number two the previous year. Entertainment advertisers, such as movie studios, TV networks and video games ran mobile campaigns throughout the year in order to drive tune-in and brand awareness of their shows and products.

Consumer Goods was the fifth largest vertical on Millennial Media’s platform in 2013, growing spend 134% from the previous year. Since Consumer Goods products are purchased in a third-party retail location, advertisers in this vertical most often run brand awareness campaigns in order to help increase in-store consumer recall of their products.

Pharmaceuticals moved up into the top 10 verticals on Millennial Media’s platform this year at the number nine position, after growing 139% year-over-year. Due to the complexity and nature of their products, pharmaceutical advertisers most often use site search actions in their campaigns that drive consumers to mobile web or landing pages where more information can be featured.

Six verticals experienced triple-digit growth in campaign spend on Millennial Media’s platform in 2013, four of which are not in the Top 10 Global Brand Verticals. This set of emerging verticals has grown their investment in mobile advertising throughout the year by not only increasing the number of campaigns they run, but also by including more advanced features in them. Experiencing the most growth was Sports at 489%. Next was: Employment (209%), followed by Energy and Power (196%); Non-profit and Charities (170%); Pharmaceuticals (139%) and Consumer Goods (134%)

In 2013, 34% of all platform campaigns integrated an app download action. Watch Video actions were included in 18% of all platform campaigns in 2013. Video actions were used across every vertical. And Dynamic Functions, such as swipe, shake, tilt, and add to calendar were included in 7% of campaigns on In 2013, These actions were not included in Millennial Media’s research reports in 2012, but have grown in popularity as more advertisers integrate these advanced functions. Advertisers leveraged these features, which are often tied to native functions of the device, to drive increased consumer engagement.

Retail advertisers were the most frequent users of a number of post-click actions, including Retail promotion and Dynamic Functions. 29% of all Retail campaigns included the store locator/view map action in their campaigns, in order to help drive consumers into brick-and-mortar locations. And more than half of all Entertainment campaigns included a watch video action, most likely previewing a movie or TV show premiere.

In 2013, 22% of all campaigns on Millennial Media’s platform had the goal of driving Brand Awareness for an advertiser, an increase of 8% from 2012. Videos are frequently used to drive awareness and recall across all verticals.

Advertisers in the Government Services vertical, such as military or local services, frequently leveraged video to share information with the public. The Finance vertical most frequently ran campaigns with a goal of consumer registrations such as getting an insurance quote or signing up for more info on a mortgage. The Retail vertical was the most frequent user of two campaign goals: Site/Mobile Traffic and Increased Foot Traffic.

This and much more information is available from Millennial Media

This entry was posted on Monday, March 24th, 2014 at 10:00 @458 and is filed under Scuttlebut. You can follow any responses to this entry through the RSS 2.0 feed. You can leave a response, or trackback from your own site.