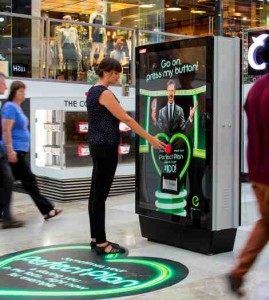 oOh! has custom built seven dispensing retail panels that feature a red illuminated button that, when pressed, dispenses information cards about EnergyAustralia’s flexible pricing plans. The information cards fold up to the size of a credit card.

Simon Brady, EnergyAustralia’s head of product and brand marketing, says that the Perfect Plan campaign is a fun, creative and interactive way to build brand awareness and obtain cut-through.

“The retail environment is the best way to reach our target audience – it’s an area where they spend an extended period of time, and it’s also an interactive and exciting space,” says Brady.

John Purcell, oOh!’s head of production, says that combining strong creative with dispensing ShopaLites is becoming more popular as they not only impact shoppers, but encourage interaction and greater connectivity.

“We know people are receptive to product information while in the shopping centre, as they are looking for inspiration,” says Purcell. “Dispensing retail panels deliver high impact and a greater long term connection as they give shoppers something to take away.”

Creative agency on the Perfect Match campaign is Leo Burnett with media by Mediacom.

This entry was posted on Monday, March 24th, 2014 at 18:46 @823 and is filed under DailyDOOH Update. You can follow any responses to this entry through the RSS 2.0 feed. You can leave a response, or trackback from your own site.