Various Atlanta newspapers seemed to be the first to report last weekend about Coca Cola erecting interactive advertising panels fitted with digital cameras at bus stops in seven Spanish cities. The panels let passers-by take photos of themselves designed to ‘capture people’s own unique moments of happiness’ and then in true UGC / VC2 style chosen photos will then be displayed on (said) panels. 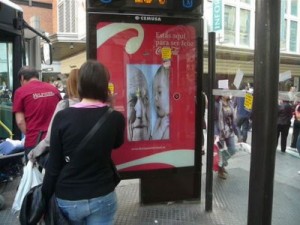 Coca Cola’s creative agency in Spain is McCann-Erickson (we are not sure who buys their media) and exact details of the rollout are ‘sketchy’ at best. If you read Spanish there is a good story over on LA noCONVENCIONAL

Our own people in Madrid tell us that technically it worked well but on a communication level not so – a lot of people did NOT know that the cameras were there for example.

There was also criticism from some that the surrounding poster was static and that you could not download the photo or do anything else with it.

Still, it’s another example of an interactive bus shelter – we think there will be more to come throughout the year.

This entry was posted on Wednesday, March 18th, 2009 at 09:59 @457 and is filed under DailyDOOH Update. You can follow any responses to this entry through the RSS 2.0 feed. You can leave a response, or trackback from your own site.