Wearing his every present Google Glasses and an armful of ‘wearables’ (futuristic digital watches of various types), Manolo Almagro, senior vice-president managing director of TPN, a retail marketing agency in the Omnicon group, forecast retail in the year 2025 at the Scala Partnership Conference in Austin, Texas, last Wednesday. 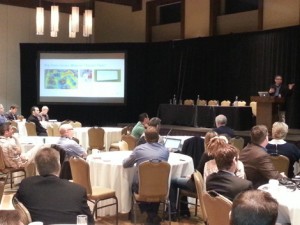 By then – and that year isn’t that far away – 50 billion devices will be connected to the Internet, Almagro said. Cars will be able to talk to you and tell you eg. what the traffic is like up ahead. Stores will anticipate what you as a consumer will need before you need it. The Internet of Things will talk to people about their needs. Big data will give way to Smart data.

Almagro laid out a roadmap of where retail is heading and in doing so, provided insight into where digital out-of-home/digital signage companies should be positioning their efforts.

“Retailers are no longer in control,” Almagro said – a comment that we heard frequently from other speakers as well during the two-day conference. “The consumer is the shopper, the buyer and the influencer. And by 2025, computers and information will be part of everything you do – not computers as we know them, because everything will be in the cloud.”

One thing that Almagro said, rather surprised us, although perhaps it makes sense, since Apple has not included it in the iPhone, and has launched its iBeacon. It is that “NFC is on a death spiral.”

Close to home, he said that Smart phones are getting bigger, and that Google already has a Super phone with a 3D scanner. You can scan the room you’re in, and software can mine information about where you are, what’s in the room, and more.

And he expects that people will do a lot more buying off TV shows similar to what has begun on Cougartown, allowing viewers to buy items seen on the show.

“Mobile will continue to dominate,” he said. “We’ll see mobile point-of-sale at the retail level. Paypal is coming out with something like this. But the mobile wallet is slow to take off.”

This entry was posted on Monday, April 7th, 2014 at 02:04 @128 and is filed under DailyDOOH Update. You can follow any responses to this entry through the RSS 2.0 feed. You can leave a response, or trackback from your own site.