Keven Yue, senior manager of business development at Ingram Micro, has an idea: “Why not have a show that combines both digital signage and physical security?” 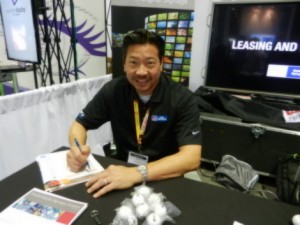 In thinking about it, and running the idea by a couple of digital signage industry execs, it could be an idea that could help a show like Digital Signage Expo, which seems to be stuck at around 4,000 attendees (approximately the same number year after year).

“We’re getting heavily into physical security, both at the B2B and consumer level,” Yue said to me at #2014SignExpo.

“It has basically the same kind of distribution system as digital signage, and is definitely measurable.”

Yue is well aware of how valuable physical security can be. Ingram Micro handles it for Macy’s stores, and, in Boston, two ‘scenes’ from Macy’s captured at the time of the 2013 Boston Marathon bombing were instrumental in the capture of those involved.

Alongside its digital signage, “We’re seeing double digit growth in the physical security side of our business,” said Yue. “Integrators will easily have the technology, because the infrastructure is similar to do. And, of course, it’s important to know about the privacy regulations when dealing with this sector.”

Ingram Micro is a $44 billion global IT distribution company that works with 2,000 partners on the IT side. Digital signage and physical security are part of its offerings.

This entry was posted on Saturday, April 26th, 2014 at 13:03 @586 and is filed under Scuttlebut. You can follow any responses to this entry through the RSS 2.0 feed. You can leave a response, or trackback from your own site.