As it seems to do at all the big shows that we attend, Samsung had a number of partners on its booth at #2014SignExpo. 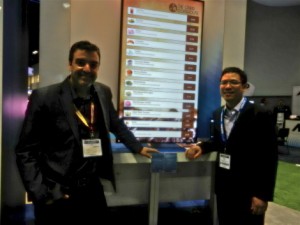 One of them that we spoke to was Long Beach, California-based Insteo‘s Jim Nista, CEO and creative director, who was keen on Samsung SSP (smart Signage Platform) and wanted to show off his company’s digital editable content.

“We can provide animated templates,” said Nista. “The screen has no external media player, and it has Wi-Fi. All you need is one power cord.”

The screens are from 32” to 65” and can be edited from any computer of mobile device.

Demonstrating how a screen is easily edited from his mobile phone, Nista says that the target market is small sign shops and only a monthly license is involved. 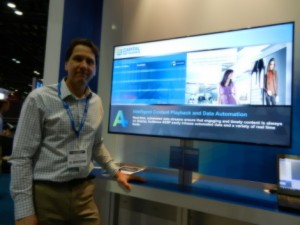 We also talked to Angelo Kosmidis at Capital Networks, Markham, Ontario, Canada, who also likes Samsung SSP because of lack of need for a media player, and the measurability aspects.

Kosmidis said that Capital Networks is working with ‘dynamic NFC’. This allows the use of the same tag (eg. a QR code) for many different ads, depending on the content showing at the moment any ad is viewed. eg. If an ad for movie comes up, a QR code on the screen might allow the viewer to see on his mobile device, a trailer for the movie or where and when it is playing.

The next ad that comes up might be for a soup, and the same QR code will allow the viewer to see the ingredients and enter a contest. It can also be used for wayfinding.

This entry was posted on Monday, April 28th, 2014 at 10:00 @458 and is filed under DailyDOOH Update. You can follow any responses to this entry through the RSS 2.0 feed. You can leave a response, or trackback from your own site.