I don’t know whether it’s the time of year or whether Daktronics, located in Brookings, South Dakota, is just getting busier and busier year around, but we learned of three of its new projects this week. 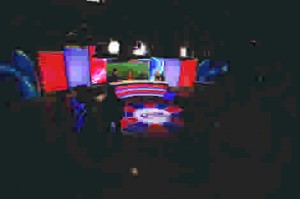 Heinz Field and the Pittsburgh Steelers asked Daktronics to add a new scoreboard in the Northwest End Zone of Heinz Field.

And Vincennes University athletics has had a new element added to the game-day experience with this spring’s installment of a center-hung video display designed and manufactured by Daktronics. The display was installed inside the Physical Education Complex during March in Vincennes, Ind.

At Liberty U.,“This new 4 mm display is absolutely beautiful and will be the centerpiece of our new Liberty Flames Sports Network TV studio,” says David Diamond, a media technician at the university. “This will serve as the backdrop to our daily sports shows.”

The new TV studio set piece follows a variety of recent Daktronics installations at Liberty University. Liberty has previously installed LED video displays for their basketball arena, baseball facility, football stadium and soccer field. All of these displays were installed within the past two to three years.

Now, the new display at Liberty Softball Field will measure approximately 14’ high by 18’ wide and feature a 15 HD pixel layout. It will be used to provide live video and replays across the entire display but can also be windowed into smaller sections to provide a combination of statistics, animations and graphics, advertisements, and other game information. This outdoor display will feature impressive image quality while also providing multiple levels of protection from the elements. 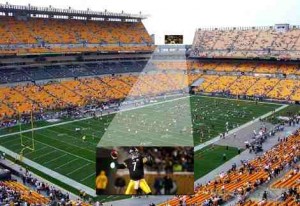 At Heinz Field, the new display for the Pittsburg Steelers professional football team will feature a 13HD pixel layout and measure approximately 35’ high by 72’ wide. It will be capable of highlighting live video and instant replays, while also being able to be divided into multiple separate windows to show a variety of statistics, scoring information, graphics and animations, and sponsor messages.

This new display technology, incorporating wide angle visibility for viewing throughout the stadium, will easily fit into the existing display system. With Daktronics control equipment, the display can easily be controlled on its own or in conjunction with multiple displays in and around the facility for maximum versatility and impact.

For Vincennes U., the Trailblazers’ new centerhung over the basketball court features a four-sided video display. Each display measures approximately 7’ high by 11’ wide and includes 6 mm line spacing. These displays are capable of showing one large image to highlight live video and instant replays, or like the other screens mentioned, can also be divided into separate windows to show a variety of vivid graphics, colorful animations, up-to-the-minute statistics, scoring information and sponsor advertisements. 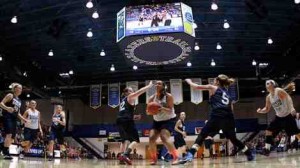 “This equipment will offer a profound visual presentation that is unparalleled at any college or university in Indiana,” says Ryan Stratton, Daktronics sales representative.

“The University’s new Daktronics equipment selections will put their show on par with professional teams.”

The centerhung is raised and lowered using a custom-designed, permanently-installed hoist system from Daktronics. This system, which incorporates the latest in hoisting technology and safety, is used to support the display at varying elevations depending on the arena’s needs.

In addition to the equipment installation, Vincennes University also received a bank of hours for the creation of digital content to be produced and delivered by Daktronics Creative Services. This content will consist of any mixture of sponsorship messages, crowd prompts, headshots, game opens and venue announcements at the request of the Trailblazers.

This entry was posted on Friday, May 2nd, 2014 at 16:00 @708 and is filed under Scuttlebut. You can follow any responses to this entry through the RSS 2.0 feed. You can leave a response, or trackback from your own site.