The Bloomberg Hub was officially launched in the terminal building at the London City Airport Wednesday May 7, 2014. A busy press turnout saw Dan Doctoroff, CEO and President of Bloomberg LP, and Matthew Hall, COO of London City Airport, unveil the Media Wall, the final piece of the multi-screen installation. 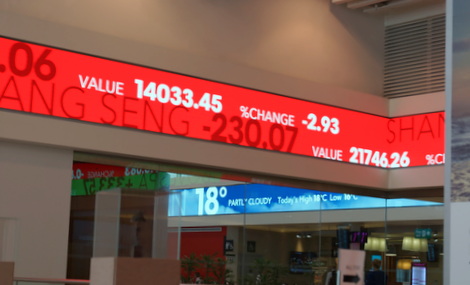 An impressive branding project partnership, it has been years in planning, and will be in place for at least three years. The biggest features that passengers can’t fail to notice are the massive LED tickers wrapping three sides of the land-side pre-security area, and all four sides of the air-side atrium leading to the main departure lounge.

They show a mixture of dynamic content drawn from Bloomberg’s live data, and you will see stock pricing, indices, currencies, weather, and news feeds for different cities, many of which are destinations from the airport. There are some clever and subtle ways in which this is displayed, with the data affecting the formatting of the text and imagery backgrounds.

The combined length of the tickers is 130 metres, the screens being made of 4mm pitch LED.

The departure lounge itself has been upgraded, with a new Hub area, at the centre of which is the Media Wall itself, and the Apps Bar installed behind, featuring Bloomberg Terminals and tablets loaded with the Bloomberg mobile app suite. The Media Wall shows more engaging content about the world in general, financial data analysis and insight, and is flanked by live Bloomberg Television and live departure boards. 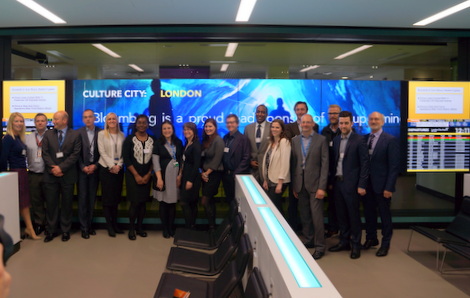 Telecine of Montreal deployed and programmed the whole installation using Scala, creating some very large canvasses and clever layering in the process. James Fine, owner, Telecine, was on hand to satisfy our technical curiosity and provide a few facts and figures.

“The ticker canvasses are over 15,000 pixels wide, and the Media Wall and Media Panel videowalls are running each LCD panel at HD resolution,” he explained. “Even with the large resolutions we are supporting, we’ve managed to design the whole solution with a total of four media players.” Doing some quick sums, that would mean the installation is displaying about 36 Mega Pixels across all the displays.

He explained that they’ve partnered with Beaver Group for the actual installation work (Beaver Group, of course, being one of the largest Scala VARs in the UK). We believe that most of the media players were supplied by iBase.

[3]Dan Doctoroff, Bloomberg’s CEO said: “LCY’s customers are business travellers who value the things Bloomberg does best: providing accurate, relevant and timely information that helps them make better business decisions. The Bloomberg Hub at LCY is a great example of this; it is our biggest brand initiative worldwide and reinforces our continued investment in London as a leading global financial centre.”

[4]Matthew Hall, LCY’s COO told us: “The arrival of the Bloomberg Hub in the LCY departure lounge furnishes our passengers with a new level of service – that of up-to-the-minute data and information – which reflects the moves we’re making towards managing the passenger journey through the use of technology. The agreement we have with Bloomberg reflects a burgeoning strategy of working with high-profile, global brands to deliver relevant content and added value to passengers as part of the airport experience.” 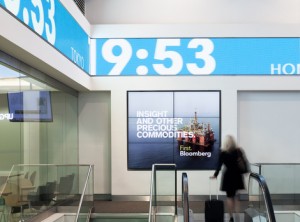 Maureen McGuire, Chief Marketing Officer, Bloomberg LP, said: “The Bloomberg Hub is an innovative and exciting customer experience that embodies the Bloomberg brand – a distinctive, dynamic network of information, technology and ideas. It delivers timely, valuable news and data to London City Airport’s business travellers, many of whom are our clients and prospects.”

Bloomberg have also sponsored the free WiFi in the terminal as part of the package, with the landing page showing scrolling market information.

We are delighted, and very proud, to be a part of this amazing project. Kudos to Telecine for some truly amazing and jaw-dropping content!!

Hey Jeff – Bloomberg have actually produced a very nice video piece about the project, which you can see embedded into the web-page here: [6]