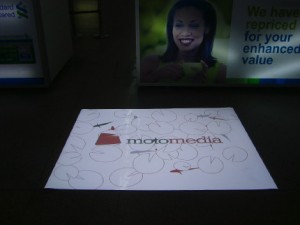 Located at the check in counter (seemingly) for maximum exposure here is a picture of one of the two floor projection systems seen In Julius Nyerere International Airport in Dar es Salaam, Tanzania.

There’s no mistake it’s from Motomedia as it was in test mode when the photograph was taken.

We also believe that there are two interactive walls being installed

This entry was posted on Friday, March 20th, 2009 at 14:22 @640 and is filed under Scuttlebut. You can follow any responses to this entry through the RSS 2.0 feed. You can leave a response, or trackback from your own site.