In celebration of Earth Day 2009 (April 22) I thought I’d follow up on recent post regarding the results of MediaZest’s carbon footprint study and CNN’s  report on the “green” OOH initiatives in Times Square.

First of all, let’s face it- it would seem that the current generation of the DOOH industry as a whole isn’t really concerned with doing right by environment. Most carbon-footprint studies are used as marketing tools -also known as “green-washing” If the industry really cared about what was happening to our environment, we should have done alot more- well before our networks grew into the 1000’s of screens we have today. A carbon footprint study is merely afterthought, not a strategy.

Granted, I don’t have the details from the MediaZest study, but if I were to review the overall DOOH network as  a LEED AP, I would ask “does the study include the impact of the of Mercury based bulbs used in the bulbs of the projectors or backlights of the flat-panel displays?” ALSO “is there consideration for the disposal or e-recycling of the displays once they are no longer of use?”

A few years ago, former US Vice-President Al Gore made a movie titled “An Inconvenient Truth” I thought I’d use his approach to raise awarness on some of the “Inconvenient Truth’s” of the DOOH industry.

Over the past few years, various brands that advertise in Times Square have stepped up the pace to show the public that they are eco-concious and care about climate change. In some cases, Times Square takes a step forward, with an truly innovative approaches, – in others we take two-steps back, with “inconvenient truths” which become apparent when you take a closer look at the campaigns. 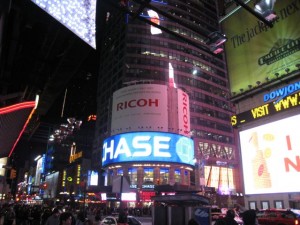 A Step Forward – On November 2008, The Ricoh sign at 42nd and 7th Avenue was installed with 16 wind turbines and 64 solar panels to power the sign. this sign is a traditional billboard, not an LED spectacular although earlier press releases conveniently omitted that initial fact. This sign has no other power sources, it can only generate power when the wind and sun (solar panels) conditions are “ideal” Be that as it may, this sign truly is powered soley by wind and solar means. Mother nature’s energy is the only thing that runs the sixteen, 300 watt floodlights that light up the sign. Which also means, when it rains, on a cloudy day or at night (as you can see in the photo)  the sign has no lights.

Two Steps Back, – On New Years Eve 2008, Coke launched their “Refresh, Recycle, Repeat” Campaign on their Times Square Billboard making the claim that they have switched the sign to consume only wind-power. The inconvenient truth? Coke is really just buying carbon off-set credits from wind-based electricity in a direct exchange for the electricity it STILL consumes of the grid. Which in my opinion, is like driving a Land Rover Discovery but buying a just the required amount of carbon off-set credits so you can say you have the same carbon footprint as driving a Toyota Prius. 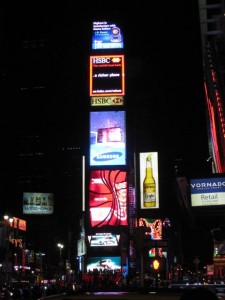 A Step Forward- At the end of last year, Duracell ran a very innovative campaign where they employed human power to run a sign in Times Square. In the weeks prior to New Year’s they set up a power lodge and asked volunteers to pedal stationary bikes. Power generated each person was stored up in a giant battery the plan was to generate enough stored energy to light up a sign made up of 608 halogen bulb (7.25 kilowatt hours) that was light after the ball dropped on new year’s eve. The results? – it took 140,000 people, and 250 hours of pedaling to provide enough electricity to light up the sign for 15 minutes.

And finally, last month, the majority of signs in Times Square (and the rest of NYC’s big iconic buildings) participated in the global “Earth Hour” event on 28th March 2009,  They did this to raise awareness of our Global Crisis – The major LED spectaculars such as the NASDAQ tower, Reuters, Coke, and ABCs Supersign went dark from 830pm to 930pm – check out the before and after photos.

It is envitable that DOOH networks will continue to grow and numbers of screens increase in the coming years. As a fledgeling industry we still have time to stem the tide and plan ahead for the future. Think sustainability and consider the following as you plan for either new networks or future expansion:

This entry was posted on Wednesday, April 22nd, 2009 at 18:29 @812 and is filed under DailyDOOH Update. You can follow any responses to this entry through the RSS 2.0 feed. You can leave a response, or trackback from your own site.