The Universal Pictures UK premiere of Richard Curtis’s new comedy ‘The Boat That Rocked’ was held in London’s Leicester Square this week and a campaign planned and booked by Mediacom which ran alongside it captivated fans and passers-by with the streaming of exclusive red carpet footage onto 25 LCD screens surrounding the square. 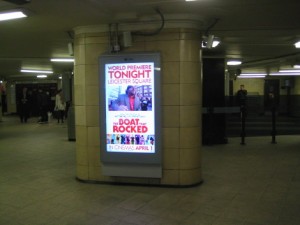 One minute edits of live red carpet footage, recorded by Sassy Films, were given to engineers at CBS Outdoor and edited within an hour and then transmitted across the screens to maintain the buzz in the square.

CBS Outdoor tell us, not surprisingly, that this is the fastest turnaround of editing, rendering and uploading of content that the media owner has carried out on its outdoor screens.

The screens, which were bought on a sole occupancy by Universal Pictures UK, earlier displayed adverts to introduce the five main characters, drive commuters to the event, and promote the release date.

The campaign runs until this evening.

This entry was posted on Wednesday, March 25th, 2009 at 10:49 @493 and is filed under DailyDOOH Update. You can follow any responses to this entry through the RSS 2.0 feed. You can leave a response, or trackback from your own site.