Walking the floor on the first day of #dse2016, one of the first things we’ve noticed is the total absence of Christie, which most years stands out with a major booth and often has its products and partners front and centre. 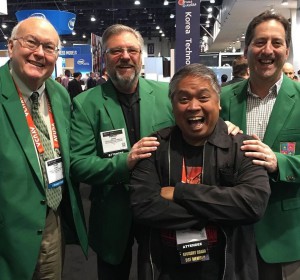 Combined with the fact that Scala doesn’t have its own booth – although is visible with various partners and CEO Tom Nix is very much present, and NanoLumens has only a meeting room (although more on that later), the show seems somewhat smaller this year.

Perhaps quieter, too, although that may be because, even though there are some very nice individual products, everybody is offering 4K so nothing has yet – I stress yet – struck me as the ‘next big thing’.

We’ve personally seen very good (people) traffic, all the way back to the smaller booths and young companies, but haven’t personally been able to stop and look at many yet. And we’ve heard lots of information that we’ll be sharing over the next few days. There’s a major hotel chain with four big brands that will be revamping its platform, although we’re only familiar with one company that’s in the running. We’re told that Woven Media is doing very well and will be upping its marketing budget.

And we’ve seen many familiar faces. We noticed the ‘mighty Phil Cohen’ wandering around. Could he be contemplating getting back into the digital out-of-home sector? Young and fast-growing Impax Media’s tech specialist Alexis Wolfman is here taking a look around for the first time.

We’ve heard people say that the show seemed quieter this year, heard others say that they hadn’t yet found what they’ve been looking for, while we’ve heard more wax enthusiastically about the show being really great and that they’re doing lots of business. Guess it just depends what you are looking for!

This entry was posted on Thursday, March 17th, 2016 at 19:09 @840 and is filed under Scuttlebut. You can follow any responses to this entry through the RSS 2.0 feed. You can leave a response, or trackback from your own site.