Late last week we sent DOOH INSIGHTS Volume 5 to the printers. We should receive 10,000 copies back by the end of the month, the first batch of which will be distributed at a Clear Channel UK event in London at the end of September. 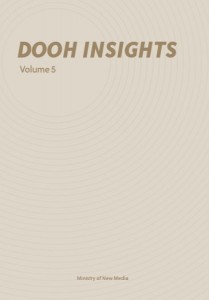 London during October sees further distribution at the JCDecaux / IAB upfront and the (not yet announced) Exterion Media / TfL Launch Event plus we’ll be hand-delivering copies to our usual London network of friends – this year, along with copies of The DailyDOOH New York Special Edition newspaper.

New York Digital Signage Week sees several thousand more copies distributed – every attendee at The DailyDOOH Investor Conference and every attendee at the DPAA’s Video Everywhere Summit will walk away with their own copy.

This entry was posted on Sunday, September 4th, 2016 at 14:43 @655 and is filed under DailyDOOH Update. You can follow any responses to this entry through the RSS 2.0 feed. You can leave a response, or trackback from your own site.