The Rise of the Tomb Raider (Literally) in Times Square 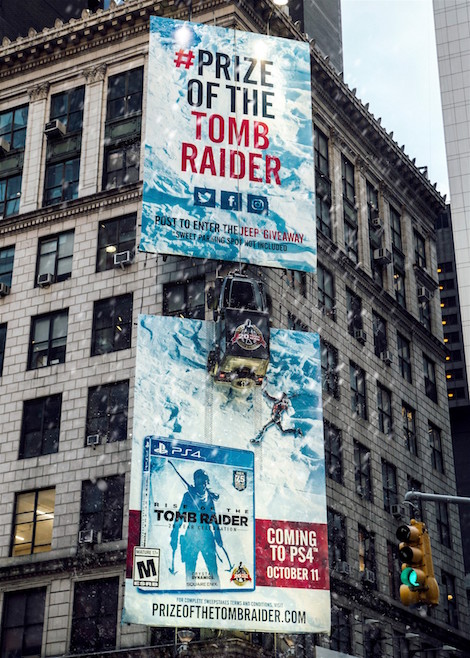 Patrick Runco, Vice President, Executive Creative Director of Liquid Advertising told us “We’re all huge Tomb Raider fans at Liquid, so when Square Enix wanted to put together a giveaway to support the big PS4™ launch, we knew we had to create a big, vertigo-inducing outdoor scene to show off the prize Jeep. And it was a chance for us to have a little fun with the New York location, in that the Jeep is in a parking spot that maybe only Lara Croft could possibly get,”

Patricia Turosz, Vice President, Client Partnerships & Experiential at OOHA/Wilkins Media said “Lara Croft is subjected to extreme weather in the game — wind, rain, snow and ice — and must overcome a great deal to survive. We wanted to bring some elements of the game to life with this billboard in a unique and memorable way.”

“At times during this project I found myself relating to the Lara Croft character in that I was met with many challenges in attempting to execute a campaign of this scale in New York City”.

In the past, other out-of-the-box billboard campaigns in Times Square featured smoke or steam, but worried New Yorkers called the New York City Fire Department (FDNY) fearing that the steam coming from the billboards was actually smoke from a fire. Last spring OOHA/Wilkins Media executed a highly publicized 3D climbing wall on a Times Square billboard for Saatchi & Saatchi for the Toyota RAV4 Hybrid.

FDNY and other city officials have greenlighted the Tomb Raider billboard, which will run through November 7. The Jeep Wrangler ‘climbing’ weighs 2,000 pounds (without the engine). The billboard is actually two stacked billboards with a combined height of 64 feet. ‘Snow’ is falling for three minutes every 15 minutes through Oct 30. From today through October 9, it will snow non-stop noon-1 p.m.

The ‘Rise of the Tomb Raider’ PS4 game release date is October 11. The Xbox version of the game was released last November. New York Comic-Con takes place at the Jacob Javits Center in Manhattan Oct. 6-9, many of whose fans will be attracted to the billboard, which will be in Times Square through Oct. 30.

‘Lara Croft: Tomb Raider’ the film adaptation of the game, was released in 2001 starring Angelina Jolie. A new film based on the game is scheduled for release in March 2018, with a new actress playing Lara Croft.

This entry was posted on Sunday, October 9th, 2016 at 16:31 @730 and is filed under DailyDOOH Update. You can follow any responses to this entry through the RSS 2.0 feed. You can leave a response, or trackback from your own site.