Thousands of people looking at the same display at the same time can EACH see their own entertainment, information, advertising, directions and / or translations, such is the claim from West Coast startup MisappliedSciences and at #CES2020 last week Delta Airlines easily had the best booth in the travel and tourism part of the LVCC actually demonstrating this technology in action. 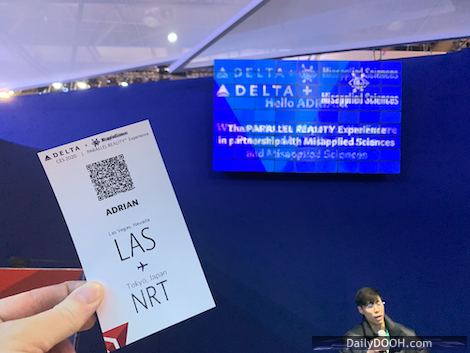 Each ‘flyer’ was asked where they wanted to fly to and was then issued a boarding card.  I chose Tokyo. On entry to the ‘terminal’ building the sole screen displayed to me “Hello Adrian” and knew that I was flying to Japan. The other flyers looking at the same display saw their own personal information and the destination that they had chosen. This apparently works for up to 100 people at a time at the moment. 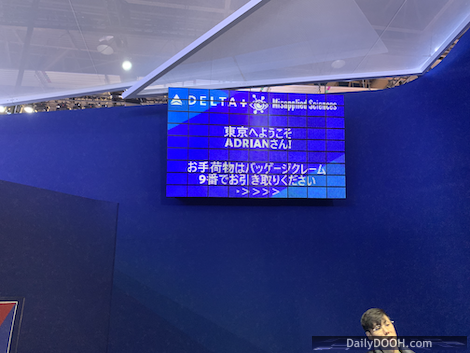 Other personalisation included language options (as shown above) but in reality many things could be shown as individual (advertisements in local language, specific gate information, late calls, wayfinding etc.).

Pixels on the display (shown below) can simultaneously project up to millions of light rays of different colours and brightness. Each ray can then be software-directed to a specific person. 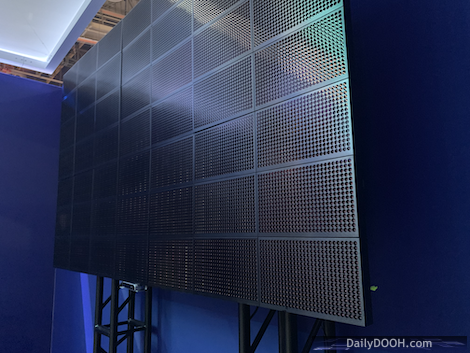 A conventional pixel outputs only a single colour at any moment whereas a PARALLEL REALITY™ pixel can simultaneously output up to millions of controllable rays of different colours and brightness.

Delta are putting this technology into Detroit airport later this year as a pilot installation.  There’s still a lot of work for MisappliedSciences to do to better understand OOH but this really was an impressive demonstration.

This entry was posted on Tuesday, January 14th, 2020 at 16:55 @747 and is filed under DailyDOOH Update. You can follow any responses to this entry through the RSS 2.0 feed. You can leave a response, or trackback from your own site.