#NABShow Moves From April to October 2021

If you thought that trade shows in North America might get back to normal in the first half of 2021 then think again, as NAB President and CEO Gordon Smith has just announced that the 2021 NAB Show, originally scheduled for April 2021 has been rescheduled for October 9–13, 2021 in Las Vegas. 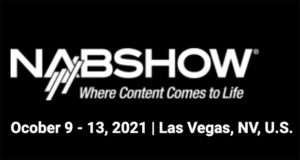 Back in June we wrote ‘Will The Next (Big) @NABShow Be June 2021?’ after the National Association of Broadcasters sent out a survey sent to their exhibitors, partners and some past attendees giving potential options for a new date.

Gordon Smith said “We have witnessed growing concern and uncertainty over what the next six months will bring; enough that there appears to be a good deal of reluctance around participating in large events in the first half of next year. The pandemic remains a significant threat and the evidence suggests it will be well into next year before it could be under control in the U.S. We also have our own concerns around being able to deliver the type of event in April that will not only drive results, but one that can be produced safely for all involved and without significant limitations on the experience.

Moving NAB Show to October means that they are considering alternative 2021 dates for NAB Show New York, held annually in October. Gordon Smith said “On the plus side, the 2021 Radio Show will co-locate with NAB Show in Las Vegas as will NAB’s Sales and Management Television Exchange; and there is opportunity to add additional partner events”.

Beyond this, we have done our best to avoid direct conflicts with other domestic and international events, and have reached out to allied organizations and partners to both share our thinking in advance and to offer to work collaboratively toward turning this into an opportunity for all.

Other large event organisers may try to spin this (or more likely, ignore the news completely) but this is big news and we think will likely be a fair reflection on the state of trade shows in H1 2021.

This entry was posted on Wednesday, September 9th, 2020 at 20:43 @905 and is filed under DailyDOOH Update. You can follow any responses to this entry through the RSS 2.0 feed. You can leave a response, or trackback from your own site.