Mesmerize [1] has announced the expansion of its Giving Tuesday initiative to include pro bono media donated to charitable organizations in addition to a monetary donation. 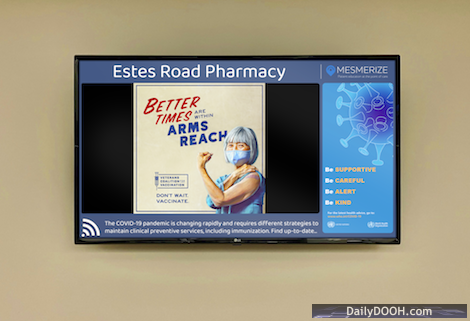 Craig Mait, Mesmerize President & Chief Revenue Officer told us “Mesmerize is proud to partner with Team Rubicon and the Veterans Coalition For Vaccination to deliver one of the most important public service announcements of our time, encouraging people to get vaccinated against COVID-19”.

Beginning in 2020, Mesmerize implemented a company-wide ‘Giving Tuesday’ giving its employees the opportunity to nominate charitable causes that are important to them, and making a monetary donation to one of the suggested organizations on the first Tuesday of each month. As of April 2021, Mesmerize will also be donating pro bono media to the charitable organisation selected.

Team Rubicon [3] has been chosen to kick-off the company’s new Giving Tuesday. Mesmerize will be making a donation to the organization as well as playing the Veterans Coalition for Vaccination Campaign across its digital network of over 1,500 pharmacies nationwide. The Veterans Coalition for Vaccinations is a partnership between leading veterans organizations, including Team Rubicon, whose mission is to unite and mobilize a nationwide network of veterans to ensure equitable access to vaccinations for all Americans, regardless of geographic or socioeconomic limitations.

The campaign features a diverse collection of portraits of every race and age group spreading messages of positivity and unity with a simple message to “Don’t wait. Vaccinate.” Mesmerize will be leveraging the Spanish language creative across its network of pharmacies within high-Hispanic populations to ensure the campaign message speaks appropriately to the right communities.

Team Rubicon serves communities by mobilizing veterans to continue their service by leveraging their skills and experience to help people prepare, respond, and recover from disasters and humanitarian crises. Founded in 2010, the organization has grown to over 140,000 volunteers across the U.S. and has launched over 800 operations domestically and internationally.