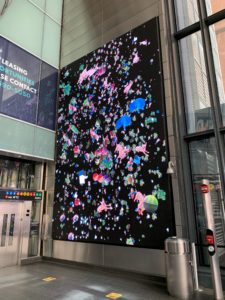 Yaling Chen, Deputy Director of MTA Arts & Design told us “Arts & Design is thrilled to launch three new commissions to welcome our riders’ return to the transit system. In this time of global crisis, artists are reshaping their thinking and practices as a tool for reflection, connection and documentation. The playful cyberscape in the digital artwork at Fulton Center touches upon our amplified reliance on virtual platforms. The photographic exhibitions seeks conformity from nature surrounding us. We hope each work will bring a moment of connectedness and joy as the riders resume their daily commuting ritual.”

Titled Handcrafted Reality, and commissioned by MTA Arts & Design for the Digital Art program, the new site-specific artwork by Jaye Rhee explores the human relationship with digital screens and notions of virtual space. Created during the pandemic, Rhee constructed detailed three-dimensional objects that assemble to create fantastical moving tableaux. Recalling early screensaver software and popular computer games in this timely new commission, Rhee’s whimsical work alludes to the collapsing boundary between the real and the virtual and captures an essential aspect of daily life that is increasingly spent in front of screens.

The large scale screens throughout the Fulton Center complex feature compositions made up of objects that the artist created by hand referring to familiar digital environments and two chihuahuas dressed up as Bambi roaming around a virtual landscape. The work takes advantage of the 52-channel network throughout the Fulton Center complex by immersing the viewer in the surreal playland, offering an alternative to the typical content commuters encounter on their way. 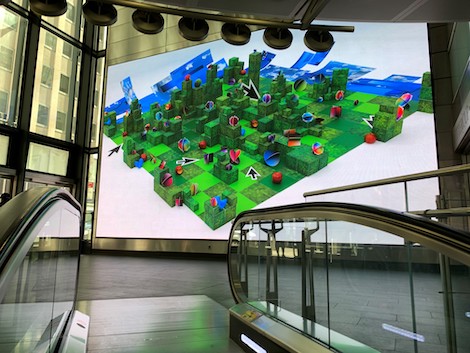 Handcrafted Reality is the tenth digital artwork presented by the award-winning Digital Art program administered by MTA Arts & Design, and will be on display at Fulton Center through August 2021.

The Great Escape at 42 St-Bryant Park

“The Great Escape,” Karine Laval’s new photography Lightbox exhibition installed at the 42 St-Bryant Park station, is a tribute to the natural world and brings the artist’s quiet garden moments into the subway station below blooming Bryant Park. 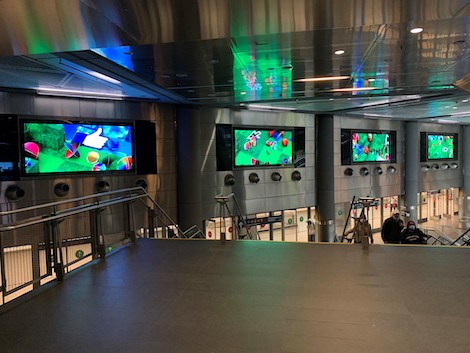 In the Spring of 2020 during the Covid-19 quarantine, Laval found refuge in her Brooklyn backyard. As she grew more attentive to her own small garden, meditating on the details became a cathartic process. Doing most of her experimentation in the camera, she created new images using sheets of mirrored glass to form layered reflections, merging fantasy with reality. In her colorscapes, Laval plays with nature’s patterns, colors, and light to create alternate realities and a new way of seeing urban nature. Laval first printed these lush images on her home printer and displayed them on the fence of her backyard, exposed to the natural elements. Then as a way to bring community together, invited people to view the work hanging among the plants. The same images of beauty found and created during an unforgettable moment in time, were enlarged and set within the subway station, surrounded by all of the renewed energy of a reopened, reactivated New York City.

The exhibit is to run for the next year and was generously sponsored by Griffin Editions and Kodak Professional.

Natal-San Miguel travels by subway across all five boroughs to photograph New Yorkers and their stories. With many city-dwellers escaping to cool off by the water during the heat of the summer, Natal-San Miguel followed suit and immersed himself in the livelihood of Coney Island to sensitively capture the quiet and exuberant ways in which New Yorkers of all kinds co-exist and engage with the iconic coastal enclave.  As commuters pass through the station, they are stopped in their tracks by the cinematic group images, transporting them immediately to the seaside and leaving with the feeling of having spent a full day at Coney Island.

The exhibit is to run for the next year and was generously sponsored by Griffin Editions and Kodak Professional.

Karine Laval is a French born, New York based photographer whose work often challenges the familiar perception of the world, bridging between the world we live in and a more surreal and dreamlike dimension. Her work has been featured in international publications such as The New York Times Magazine, The Sunday Telegraph, The New Yorker and many others. Her photographs have been widely exhibited in solo and group exhibitions and photo festivals throughout the United States, and internationally at such venues as the Palm Springs Art Museum, the Los Angeles Center for Digital Art (USA) and the Palais de Tokyo in Paris (France). https://karinelaval.com/

Ruben Natal-San Miguel is a Puerto Rican born, New York based photographer, architect, curator, creative director and critic whose work celebrates the diversity of New Yorkers and the ways in which they interact with their surroundings. He has exhibited widely at galleries and museums across the US and internationally, including El Museo del Barrio and MFA Boston,  and has been published in numerous publications including The New York Times and Artforum.

This entry was posted on Monday, June 7th, 2021 at 14:09 @631 and is filed under DailyDOOH Update. You can follow any responses to this entry through the RSS 2.0 feed. You can leave a response, or trackback from your own site.