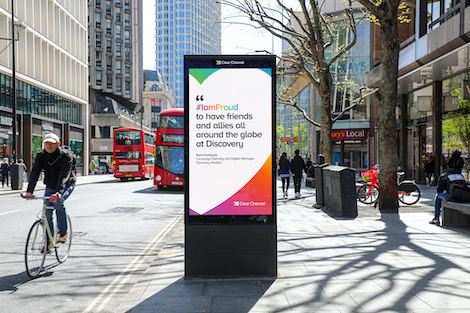 Throughout this June’s Pride month and beyond, Clear Channel will be displaying messages of hope, connection and pride across OOH screens in seven European countries. The aim of this year’s campaign is to challenge people to think about what makes them feel connected and proud, as so many people have been separated from friends, loved ones and supportive communities during the pandemic.

The campaign was initiated and brought to life by Clear Channel’s employees and features quotes from them as well as industry partners, including Posterscope UK and Discovery Communications. The quotes will be displayed on digital OOH screens in France, Spain, Belgium, Ireland, the UK, the Netherlands and Italy. It is Clear Channel’s largest grassroots campaign to date, spearheaded by LGBTQ+ colleagues and allies all around Europe.

In the UK, the campaign is running nationwide across the biggest digital OOH network Adshel Live, the Malls Live network of screens in leading shopping malls as well as the super-premium Storm sites. The campaign will also be displayed across Clear Channel’s LGBTQ+ Socialite, a network of screens in queer bars across the country – including in Soho in London, Manchester, Glasgow, Sheffield, Liverpool and Leeds.

Clear Channel are also building relationships with queer charities and community organisations to offer an allocation of free advertising space at these venues, with the aim of providing a platform to underrepresented grassroot groups, such as LGBT Switchboard. 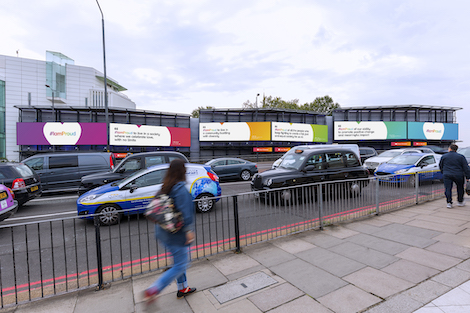 Natasha Walker, LGBT Switchboard co-chair said “At Switchboard we are a helpline open to anyone who has questions around sexuality and/or gender identity, but if people do not know we exist then how can we best support them? We are so pleased to be a part of this partnership with Clear Channel, which will allow us to raise awareness of the vital services we offer – getting our name out to those who need it most” .

The Clear Channel Pride 2021 campaign #IAmProud will run from June to September to tie in with Pride events around the country and lead in to Pride in London in September.

Justin Cochrane, CEO Clear Channel Europe, said “We’re proud to support Pride, and I’ve loved seeing this campaign come together. Out of Home is such a great medium to share thoughts and ideas in a very powerful public setting, and seeing our people, across many markets, sharing their feelings around Pride makes this very personal and inclusive.”

Christian Hug, VP LifeWorks & Inclusion at Discovery Communications, said “At Discovery, we believe the greatest ideas come from our diverse teams. As much as we are committed to putting shows on air which help give perspectives on diversity, we are equally committed to a genuinely open, respectful and safe work environment to support our LGBT+ community. Our transgender guidelines ensure equal treatment for employees who may be transitioning. Our PriDe group is one of our strongest, most active and engaged employee resources groups, massively enriching and impacting the culture of Discovery.”

The campaign comes following Clear Channel’s commitment to lead in fairness in media and builds on its ambition to use the reach of its screens and billboards worldwide to raise awareness of social issues and give a voice to cultural movements. Among other initiatives, Clear Channel recently supported Cephas Williams’ The World I Want to See campaign and has also launched the CC x Pocc Art Fund to amplify the work of underrepresented visual artists across the UK.

This entry was posted on Thursday, June 10th, 2021 at 12:39 @569 and is filed under DailyDOOH Update. You can follow any responses to this entry through the RSS 2.0 feed. You can leave a response, or trackback from your own site.