On Monday, Detroit Mayor Mike Duggan visited OUTFRONT Media’s new downtown office space, which is part of the timeless renovation of the historic Colony Club of Detroit, carried out in partnership with Detroit’s iconic Forbes family. 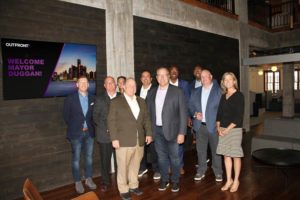 Originally started under the name Walker & Co., OUTFRONT has been a resident and partner of Detroit for over 136, continuous years; nearly two decades before the auto industry boom. Although the company name has changed over the past century, their dedication to the city remains unwavering. This capital investment in the new office space and investment in the existing New Center industrial space reflects both OUTFRONT’s dedication and investment in the city’s progressive and forward-thinking acumen.

Art Martinez, OUTFRONT’s Midwest SVP. said “We are excited to invest further in Detroit and its vibrant city center. Detroit is and will continue to be an integral part of our business. We value our partnership with the city and will continue to assist in messaging that benefits all its citizens.”

OUTFRONT Media, one of the largest out of home (OOH) media companies in the country, represents thousands of outdoor displays across the Detroit Metro area, including Michigan’s largest digital OOH network. OUTFRONT’s presence and prime distribution have played an important role in Detroit’s revitalization by partnering across numerous Out of Home campaigns with the City of Detroit, continuously keeping Detroiters informed and engaged. Some programs included messaging for Detroit At Work, the Detroit Police Department, the Detroit Health Department, as well as multiple census and local initiatives across many years.

This entry was posted on Thursday, June 17th, 2021 at 11:16 @511 and is filed under DailyDOOH Update. You can follow any responses to this entry through the RSS 2.0 feed. You can leave a response, or trackback from your own site.