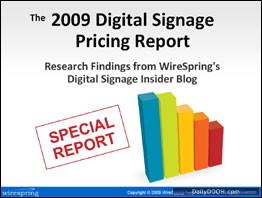 “We’ve been publishing digital signage cost estimates since 2004, so this year we wanted to get a broader sampling of what people think the products should cost,” said Bill Gerba, WireSpring CEO and Senior Writer for the Digital Signage Insider.

He added “The survey results confirmed that digital signage is more affordable than ever before. In fact, the cost of implementing a 100-screen network has dropped nearly 23% in the past year and nearly 50% since 2004. With such a large drop in the capital requirements, there has never been a better time to get into the digital signage business as a network owner or operator,”

It’s very credible, free and well worth a read.

This entry was posted on Tuesday, November 3rd, 2009 at 07:59 @374 and is filed under Scuttlebut. You can follow any responses to this entry through the RSS 2.0 feed. You can leave a response, or trackback from your own site.