We’ve recently been following a number of augmented reality businesses – one of our favourites is actually in Amsterdam, namely Layar [1] that has recently received a lot of good press, and indeed was the recipient of Vodafone’s Mobile Startup Challenge award [2] as well. 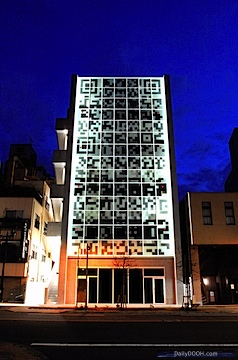 However we also stumbled upon this incredibly interesting example of augmented reality used in combination the obviously innovative use of a QR code.

Yes the picture to the right here has a giant QR code embedded on the building’s facade!

Now whilst we wouldn’t envisage billboards having QR codes as big as this we do wonder why things like the QR code revolution has seemingly passed the OOH world by?

The building in question is the ‘N Building’ in Tachiwaka, Japan. For the uninitiated the QR code on the facade allows mobile phone users to take a photo of the 2D barcode and be directed to the building’s website.

We think that is in itself pretty cool (and errr useful if the website is any good) but if you put a mobile phone application on top of that (in this case it just happens to be an iPhone app) users can simply aim their camera towards the building and be greeted with an augmented reality layer over the structure.

That ‘augmented reality layer’ in this case just happens to be a more interactive display of what is inside the building – various retail stores, their sales and promotions. As demonstrated here in the video [4] you can even read tweets coming from within the building!

Innovation within our industry has a hell of a long way to go.

A QR Code is a matrix code (or two-dimensional bar code) created by Japanese corporation Denso-Wave in 1994. The “QR” is derived from “Quick Response”, as the creator intended the code to allow its contents to be decoded at high speed.