Yen Sid is obviously telling passers by “The system is unable to handle the video stream (check if the camera is plugged and/or the camera is running properly)” which is a shame because Inwindoze Outdoor made a big noise about this first use of 3D gesture technology in an outdoor campaign. 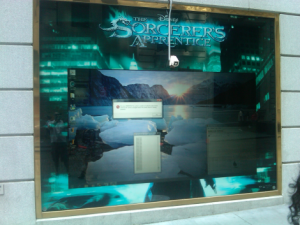 Inwindoze Outdoor created this interactive campaign for Disney’s Sorcerer’s Apprentice in conjunction with technology partner SoftKinetic and it will run for four weeks at three locations in LA and NYC yet reality does not live up to hype when it looks effectively like it’s simply a dodgy video camera plugged into a Windoze system.

The idea was to use new technology to elevate and enhance the level of interactivity above and beyond what gesture was previously capable of doing, giving people on the street the opportunity to actually play a game with their body movements controlling the action on the storefront screen but with Windoze errors appearing it doesn’t look like it has been too successful (the ‘fail’ pictures shown here were taken in NYC over this past weekend).

The displays were unveiled at three locations – in Los Angeles on Hollywood Blvd at the H&H Mall and in New York at the Trump Building at 40 Wall Street next to the Stock Exchange and also at the world famous Macy’s Windows. 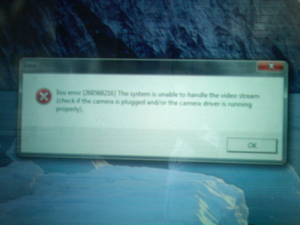 Inwindoze Outdoor have previously done an exceptional job with campaigns for Avatar, The Vampire Diaries and Coraline – we voted their work on Coraline as one of ‘The DailyDOOH Best Of 2009‘ so it is somewhat of a shame that perhaps this time they have taken a technology a step too far and have let themselves and the advertiser down in such a big way.

The Sorcerer’s Apprentice game is supposed to allow people on the street to complete a series of challenges on the storefront screen itself – users can cast spells and control the action using their arms and legs. The technology uses 3D cameras that incorporate infrared sensors to detect depth perception and movement of the user.

The campaign also features a social networking element as well. Users are prompted to upload photos and their game statistics to their Facebook pages.

This entry was posted on Monday, July 12th, 2010 at 10:57 @498 and is filed under DailyDOOH Update. You can follow any responses to this entry through the RSS 2.0 feed. You can leave a response, or trackback from your own site.

One Response to “Windoze Renders The Sorcerer Powerless”