Capital Networks Ltd., Markham, Ontario, is anticipating a significant growth of sales in the broadcast market due to new trends that include digital signage. Jim Vair, vice-president, business development at Capital Networks, says that broadcasters are turning to digital signage to reach and communicate with new audiences out-of-home.

“With the right system, a broadcaster will have a flexible, cost-effective – yet powerful – content management solution that delivers high quality presentations,” says Vair. “However, broadcasters should beware of digital signage providers that cannot support a broadcaster’s complex ‘back office’ needs, because the broadcaster’s brand is at stake on every screen.” 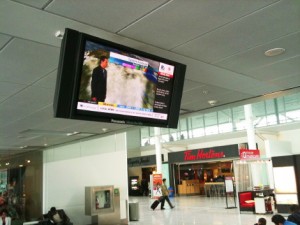 Last year, Hubert Lacroix, president of CBC, Canada’s national public broadcaster, said that the organization’s digital strategy going forward should see it transform from a broadcaster to a content provider. CBC would become, Lacroix said, “the most important creator and distributor of Canadian content across all platforms, and be deeply rooted in the regions.”

Players in the broadcast industry face tough challenges – increased competition, lower advertising revenues, investing in new distribution channels – so while they need to spread their brand and their content, they need to do so cost-effectively.

One of the ways that CBC is using DOOH to do this is its CBC News Express broadcast service to five major airports across Canada, including Toronto Pearson International Airport, the busiest in Canada, to ensure that critical news and weather reports are available to the thousands of people who pass through the country’s airports each day. The service is powered by Capital Network’s Audience digital signage solution, which enables CBC to present the latest video content and live data feeds for up-to-the minute local and national news, weather, business and sports updates. (See DailyDOOH’s article of June 3/10). The Audience platform is highly scalable and so CBC will be able to deliver its CBC News Express service to more airports and more public spaces in the near future.

Flexibility and cost-efficiency have made software-based equipment increasingly attractive to broadcasters, but they can’t compromise quality for cost because they already have a reputation for delivering technologically advanced broadcasts across different media. They must uphold this image wherever their broadcasts appear – be it on a home TV, a handheld device or a public plasma screen.

“In order to achieve content quality, there are some core features that broadcast software must deliver,” says Vair.

Vair says, “If you are a news provider, that news must be up-to-the-minute from live feeds and it must have some local content. Broadcasters can’t afford to take on teams of people to create or manage that content, so the software must have smart scheduling.

“Flexibility in terms of configuration is also a key requirement for a broadcaster who may have different content requirements at different sites.”

For example, he says, at a large, international airport, the broadcaster will want to break into live global news from satellites, along with live video feeds, while for a small commuter airport, the system may be more video-based, using captions, but it may also need more on local news and weather updates. With Capital Networks’ Audience solution, a broadcaster can have signs in, for example, 100 different sites across a region but ensure that each screen and its content is appropriate to that site, says Vair. This ensures much more efficient and targeted operations.

DOOH expenditures worldwide will grow 4.7% to $6.69 billion (£4.1 billion), according to the third annual PQ Media Global Digital Out-of-Home Media Forecast 2009-2014. Within that, the fastest growing DOOH segment is digital billboards, which the report predicts will grow by 13.2% in 2010.

DOOH brings a lot of advantages over traditional static formats such as poster billboards. Digital networks fed remotely from a central server save much of the cost compared to the staff-intensive manual maintenance of traditional sites. And on the revenue side, the added value of digital sites over traditional allows an advertising sales house to attract more advertisers and trade at higher costs-per-thousand. Digital displays also allow for more creative and flexible advertising campaigns that can generate higher return on investment.

Broadcasters and media companies are especially efficient when getting involved with digital signage because they already have the infrastructure in place to successfully manage it. Vair says that Capital Networks’ broadcast and media partners already have advertising customers and the sales, billing, scheduling and content creation staff that go along with that, so there’s much less risk than there would be to a company starting from scratch.

In the next year, and the coming years, Capital Networks plans to expand its presence in the broadcast market. 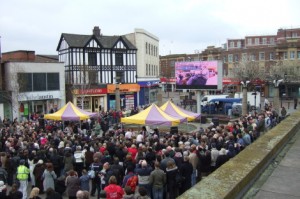 “It’s a growth market as the players take on IP-based distribution technologies beyond traditional broadcast – including IPTV, mobile TV and digital signage,” says Vair. “Capital Networks already works with the BBC, CBC, CTV and Rogers Communications, as well as a number of cable TV companies.

“What we’re now finding is that it’s not just broadcast companies that want to use digital signs for broadcast media. Many other markets are taking on broadcast systems to communicate information across multiple sites.”

For example, he says, military bases broadcast to the military and civilian personnel on the bases. Their requirements are the same as those of large broadcasters: they want to show top level information – such as Pentagon TV – but they also want hyper-local information that’s truly relevant to a specific region, campus or even building.

This entry was posted on Friday, August 13th, 2010 at 08:04 @378 and is filed under DailyDOOH Update. You can follow any responses to this entry through the RSS 2.0 feed. You can leave a response, or trackback from your own site.

One Response to “The DOOH Broadcast Strategy”