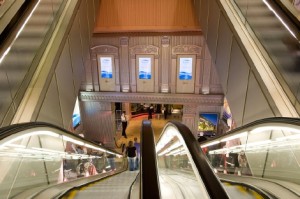 Retail Theatre as it should be done

Research conducted by Brunel University and ROI Team (an independent research company specialising in the retail sector and supported by world-famous store Harrods, has proven that shoppers respond positively to digital advertising.

The in-depth study undertaken in Spring this year has confirmed that hosting multi-faceted digital content, combining both creative visuals and informative text, has the most significant and positive effect on attitudes and consumer purchasing behaviour.

The results of the extensive field study, already set to impact on in-store Harrods digital signage plans for 2011, were aimed at assessing the value and effects of digital media in a retail setting. Close to 500 face-to-face interviews were completed involving three types of digital advertising creative displayed on the store’s unique digital plasma screen displays.

The findings are based on 437 shopper interviews conducted in March 2010 by Brunel University & ROI Team. Interviews were conducted face to face in Harrods on a ‘next available’ basis throughout March 2010, and covering all trading hours and days, and lasting one month.

The subject, a luxury holiday to the Maldives, was depicted via three differing advertising visuals. The first featured content appealing to the emotions (highly pictorial, showing turquoise seas and atoll islands, with minimal factual information), this was tested against a second with highly cognitive content (text with little colour, but high on factual information). The third advertisement combined both elements, appealing to both the emotions of the customer, as well as the need for facts and information. A control advertisement was also used as the benchmark.

Results revealed that the combination advertisement prompted a greater number of customers to state their intention to purchase the holiday than those who had seen the other two styles of advertisement. Proving that exposure to a digital message that appealed to both the emotions and the need for hard facts performs best.

Guy Cheston, Harrods Director of Advertising Sales & Sponsorship told us “Harrods has developed an extensive digital signage network in-store over a number of years, so we knew of the positive response it receives from our customers, however this research is firm proof of its effects and its superior value to our brands, and as a result we will be driving major investment into the Harrods digital advertising infrastructure in 2011”

This entry was posted on Wednesday, September 15th, 2010 at 15:49 @701 and is filed under DailyDOOH Update. You can follow any responses to this entry through the RSS 2.0 feed. You can leave a response, or trackback from your own site.

One Response to “Shoppers Respond To Digital Advertising”