We have used this quote before but it’s a good quote and it’s very relevant to what we have to say today and so we have no qualms in repeating it: Douglas Adams once wrote “Human beings, who are almost unique in having the ability to learn from the experience of others, are remarkable for their apparent disinclination to do so”. 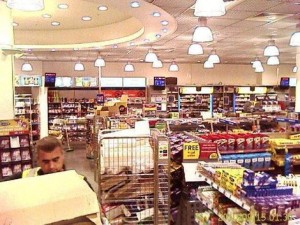 Spot the ball .. I mean spot the screen

In a week in which we have seen the world’s best retail theatre undertake yet even more research to prove the point that done well digital signage works, see ‘Shoppers Respond To Digital Advertising‘ we have also seen both Digicom and Amscreen make much of the Amscreen WHSmith Travel Network (see YouTube video promo clip here BUT mute your speakers first).

In the early days we were staunch critics of Amscreen but they have worked hard at getting us onside, we have met on several occasions and we have listened and now have a grudging respect for a lot of what they do. We hate the scaffolding pole look and the ticker does nothing for us but you can’t argue about the effectiveness of their Forecourt Network (1,600 Petrol Station Forecourts around the UK). We are a lot less enamoured with their Healthcare Network, primarily because we think CAN Media’s The Life Channel does it so much better and have been doing it for a helluva lot longer and making incredibly good money from it, however (various) Amscreen network rollouts continue to grow apace and in many places they work very well.

A WHSmith Travel Network has been with us for some time and had long been one of our favourite niche networks – hats off to MEI, later Liquid Digital (now Retec) that initially deployed it and ran it for almost 10 years BUT for whatever reason even after 10 years (that’s right ten years) they never managed to get any impetus to grow it beyond 18 – 19 locations. Along come Amscreen and voila it is everywhere – 35 WHSmith stores (113 screens) already and destined to be 100 travel stores by the end of 2010. Fabulous. You just have to admire that but here’s the problem.

Any industry veteran worth his salt would be able to tell you what is wrong with the picture shown here of this Amscreen installation in a WHSmith newsagent at London’s Gatwick airport.

One could argue that in small convenience stores that Amscreen’s ‘plug and play’ technology works – it’s a small screen, located usually on a counter top ahead of a queue but when you get to a slightly larger store (and these WHSmith stores at London airports are quite big) it’s a different matter completely.

Jason Cremins, CEO signagelive, a man who knows much about retail digital signage and also up until very recently was Chairman POPAI Digital in the UK (and who, so it just happens supplies the solution that drives all the Harrods’ screens) has in the past been someone critical of anyone not doing retail installs based on the lessons we have all learnt in the past.

He told us “Whilst I have respect for the profile and visbility that Amscreen has created in deploying their digital signage offering within the petrol forecourt sector where it works incredibly well due to it’s proximity to the ‘point of decision’ and natural queuing habits inside a petrol station. I do not believe their ‘one size fits all’ product strategy is suitable for all applications”

He added “This particular WH Smith installation is a good example where either the chosen locations require large screens to create impact or the smaller form factor screens need to be incorporated within the products on sale or at the queue” – as you can see from the picture it’s more like a **spot-the-ball competition!

What ‘Generation 2.0 digital media network at retail‘ need to look like are well documented, Bill Collins, DecisionPoint Media Insights has stood up and said this many times, he wrote here on these very pages first (back in July 2008)…

Another person whom we admire immensely is Dave Haynes, writing last night over on his blog he said “Amscreen’s product, as it now sits, belongs in small retail” – his take on the install is well worth a read (especially for those who still think we are reverting to type and just beating up on poor old Amscreen) – Dave believes that these sort of poor installs harm the industry.

Digicom who ultimately must sell inventory on these screens have some very good people and they should know these things (of course they know these things) BUT someone is either not saying or someone is not listening! Perhaps in Digicom’s narrow little world the Gatwick store is just an abberation and they just talk around it as part of the overall network – our experience with ad sales people in print, online and digital is that most couldn’t give a damn about aesthetics or content – just tell me how many eyeballs I can inflate this up to without getting laiughed at and that’s a real shame.

**A spot the ball competition is a traditional newspaper promotion where the player has to guess the position of a ball which has been removed from a photograph of a ball sport (in the UK for example this is very often football).

This entry was posted on Friday, September 17th, 2010 at 13:05 @587 and is filed under Scuttlebut. You can follow any responses to this entry through the RSS 2.0 feed. You can leave a response, or trackback from your own site.

2 Responses to “Learning To Listen”