Last week we were excited to attend a guided tour of an ‘all-digital’ location of the SilverCity CrossIron Mills Cinemas and XSCAPE Entertainment Centre just outside Calgary (Rockyview, AB) – the first of Cineplex Entertainment’s all digital concept locations and here is what we saw… 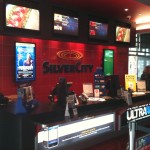 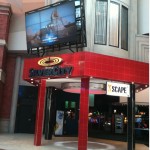 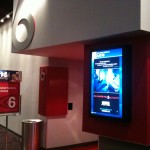 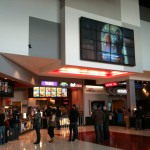 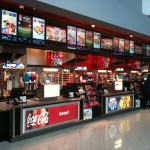 The general manager, and our host, seemed extremely pleased with the system saying that it reduced workload off her staff that would otherwise manually hang and re-hang the posters to reflect any changes in show time and cinema changes.

Almost entirely digital, the cinema used just 8-10 classic static posters, for upcoming movies. It was hinted that there were plans to replace these as well, but at a later date.

Concluding our visit, Cineplex indicated that they expect to begin rolling out digital signage technology the rest of their properties commencing in early 2011.

Coupled with Cineplex’s new UltraAVX premium theatre concept (larger screen, reserved seating, leather reclining seats and premium sound system) the entire facility looks stunning. Great job and hats off to both Cineplex and BroadSign for recognizing the value and promise of digital for the theatre industry. Our wish list would include some local messaging control (perhaps via BroadSign Creator application) to the local staff for promoting local events, but that is a policy not a technical issue and may come at a later date.

This entry was posted on Friday, November 12th, 2010 at 09:02 @418 and is filed under DailyDOOH Update. You can follow any responses to this entry through the RSS 2.0 feed. You can leave a response, or trackback from your own site.