Early this morning there were rumours of a so-called ‘Kodak Sneak Peek Webinar‘ from a number of VARs we know in EMEA and it didn’t take much poking around to find more detail. 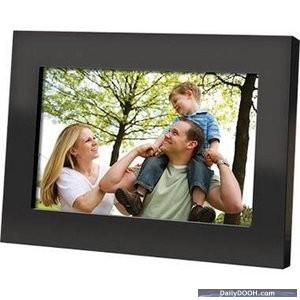 We are definitely going to see some form of partnership announcement between Kodak and Haivision (owners of CoolSign) – it looks to us like Haivision’s CoolSign Digital Signage System is going to be directly integrated into Kodak’s new JV700 (7inch) and JV1000 (10 inch) digital signs which retail for between USD 300 – 400 and USD 400 – 500 respectively.

The Kodak digital signs will be managed by CoolSign – the idea being we’d expect to power on the sign, connect to the internet via WiFi and manage the media. No doubt CoolSign will provide real-time health status and playback reporting as well.

With #iseurope starting on Tuesday we figure this will be announced Monday and no doubt shown on their (Haivision) stand in Amsterdam. Haivision are on stand 10L136 [2].

3 Comments To "Kodak Gets Into Bed With CoolSign"

I’d love to see this. I’m surprised we have not seen more usage of wifi photo frames as digital signage. How else could you get a player and screen for less than $250 that can be updated remotely. This is a perfect solution for checkout counters, hospitality check-ins, endcaps and even on table top in a restaurant.

Will be interesting to see if Kodak open up their Digital Signs using a common standard so that they can be used with a range of software platforms and not just one.

IAdea SMIL devices are now available in 10 to 24 sizes and compatible with a growing lists of software vendors with both saas and on-premise offerings.

If Kodak want to shift the maximum possible units in the digital signage sector, they will need to expand beyond one single software offering.

The Kodak deal has the coolsign player software and license included in the cost and the hardware has been optimised to suit the application.