Ian Collis, Director of Marketing, Harris Broadcast Communications never ever let me forget that it was I (not knowing the Harris corporate culture or at that time knowing much of the man) who gave him such a hard time for not wearing a tie in one of his promotional head shots. It was such a stupid thing to write on my part but Ian who always saw the funny side always liked to remind me what I had written whenever we met. 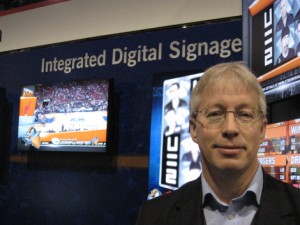 Ciarán Doran, International Marketing Director for Harris was kind enough to call us earlier this week with the sad news of Ian’s passing but now that an email has gone out from those who worked with him we thought we ought to add a few words of our own.

Ciarán wrote, in what must have been a very difficult email “It is with great sadness that I have to advise that our dear friend and colleague Ian Collis passed away suddenly on Wednesday, 9th February.”

He continued “Ian was a quiet and gentle man who was passionate about many things, not least his family, the broadcasting industry and Southampton Football Club. He was a special friend and work colleague who enabled many great things to happen throughout his career in the broadcast manufacturing industry at Sony and then at Harris.”

It seems only yesterday that we popped into Harris’ Reading office the week after Christmas just to have a chinwag and cup of coffee with Ian and there we were, both talking about football and what we had got up to at Christmas. We were both looking forward to heading off to Amsterdam for ISE 2011 at the end of the month and it was at ISE that we had our last chat.

We were however lucky enough to work closely with Ian on our Digital Signage Round Table where he was one of our panelists. As others have said about him, he was a kind and gentle man, very articulate and he was incredibly passionate about our industry. For those of you lucky enough to be in our audience you would have seen and heard that for yourselves.

The folks at Harris tell us that Ian will be returning to his beloved Cornwall in the South West of England as his final resting place.

Those who wish to join us in celebrating the memory of Ian can click here.

This entry was posted on Thursday, February 17th, 2011 at 14:03 @627 and is filed under Scuttlebut. You can follow any responses to this entry through the RSS 2.0 feed. Responses are currently closed, but you can trackback from your own site.