We had such a good response to our post The Month Ahead (April 2011) and as we said then, our Industry Events Calendar (middle right of our home page or click here) has somewhat taken on a life of its own (since we raised its prominence on our site) that we thought we’d do the same for May (and probably make all of this a regular occurrence). 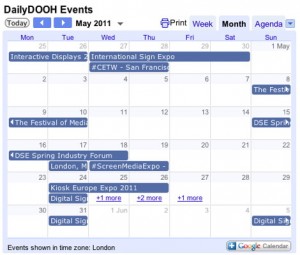 Scala’s own Connected Signage event kick starts May, followed a week later by the Festival of Media in Montreux. A week later the other side of the atlantic the folks over at DSE are holding one of their exclusive (Spring) ‘Industry Forums’.

This entry was posted on Friday, April 29th, 2011 at 08:11 @383 and is filed under DailyDOOH Update. You can follow any responses to this entry through the RSS 2.0 feed. You can leave a response, or trackback from your own site.